This week I've decided to paint something slightly different in that today's AFV hasn't been painted for use in my Normandy games. I bought this last year for use with What a Tanker! but never got round to painting it until now. To be honest, over the next few weeks I probably won't be painting much for Chain of Command. Instead, I will be working hard to prepare for the Analogue Hobbies Painting Challenge which starts in a few weeks time. Former participants will know that you can prepare your figures in advance of the start date so long as you don't apply any colour (other than Primer). So for the last week or so and probably the next couple I will be cleaning up and preparing models ready for the start of the challenge on the 21st of December. I booked a couple of weeks off over Christmas (pretty much the only holiday I've had this year) and I'm looking forward to having some family time and getting a bit of painting done. 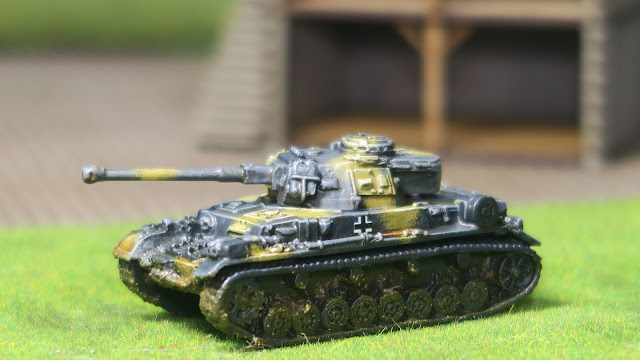 Painting a Panzer IV Ausf F2 gives me a chance to try a different paint scheme. It is a much earlier vehicle than the Normandy tanks I normally do, so I've decided to paint it with one of the many mid-war camo schemes used by the Germans. So this vehicle has a base of German Grey with patches of Middlestone. This model is from Peter Pig and is 'battle-hardened' which basically means it has got some pieces of equipment and stowage on the decks as well as items like track welded on the front and the turret. The model probably won't see the games table in a Chain-of-Command game but will be ideal for some What a Tanker action, which is what I originally bought it for. I have even got a Russian T34 somewhere so it might be fun to paint that up just as a something different. Don't go getting any ideas, I'm not about to switch my interest to the Russian front, at least not in the foreseeable future ... never say never! So on with something about the Panzer IV F2

The original Ausf F1 version started production in early 1941 but after encountering KV1's & T34's in Russia it was decided that a bigger gun was needed. Krupp was given the task of trying to adapt the existing PAK 40 L/46 gun into the turret and the result was the 75mm KwK 40 L/46. This could penetrate 77 mm of armour at a range of 1,830m and would be very effective against Russian Armour. The downside of this weapon was its significant recoil,  so the barrel was given a muzzle break and this combined with the longer weapon made the tank rather front-heavy, reducing its manoeuvrability. Three months after production started, and with a few minor improvements, the vehicle design was redesignated as the Ausf H. That version came with side Schurzen plates but this model is the slightly earlier F2. 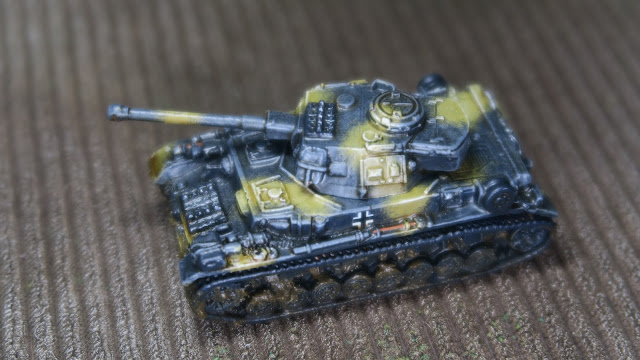 The Aust F2 had 50 mm of frontal armour and 30 mm of armour on the sides. This wasn't necessarily effective protection from a T34 but the main battle advantage this Panzer brought to the game was its gun and ammo combination. The Panzer IV F2 carried 80 rounds of 7.5cm armour-piercing capped ballistic cap (APCBC-HE). This type of armour-piercing shell has excellent aerodynamics and in guns of sufficient muzzle velocity, over shorter ranges, they are incredibly accurate. Combined with the excellent optics found in all German tanks they were a formidable weapon system.

I'm probably not going to get anything else painted this week so my next post will be Sunday when the next episode of The Quarantined Wargamer will be discussing my well developed (some would call excessively developed!) four coat varnish method.

Soft-Edged Camo without an Airbrush

I used a new brush on this model and it has been something of a revelation for me. I have been resisting buying an Airbrush for a long time, partly because I haven't had a suitable 'workshop' to use it in but mainly because it's a whole new skill to learn. So for a long time now I have been trying to perfect a soft-edged camo technique using just brushwork. I have tried a lot of different hair types and shaped heads and I have even had a go at trimming a brush to the desired shape, all without much success. Don't get me wrong, I have been satisfied with the results, and its got models on the tabletop, but I have never been completely happy with them. Now however I think I have found something that works. 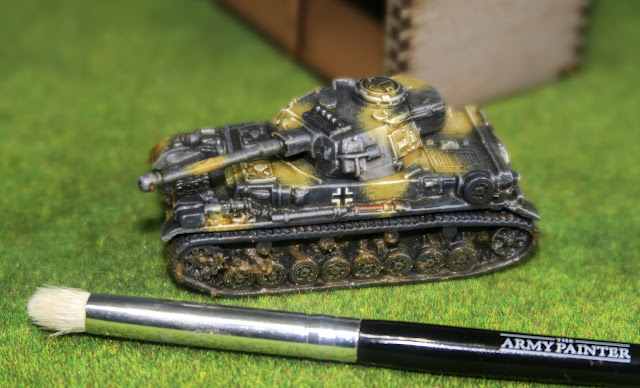 I recently picked up a pack of the Army Painter dry brushes to try out because the rounded short hair brushes looked ideal for what I wanted. The pack contains three brushes and the two larger ones are a bit big for what I need, but the smallest brush is just about suitable. The brush head is about 6mm and the short soft domed head is ideal for 'stipple dry-brushing' soft-edged camo. Basically, I dip the brush in the desired colour and rub probably 95% of the paint off the brush. Then, rather than stroking the brush over the surface to highlight the ridges, I dabbed the brush vertically onto the surface. This slowly built up a soft patch of colour with nice graduated edges. In the example of this tank, I then brushed solid colour in the centre, producing something that looks very like it has been airbrushed.
Needless to say, I am very happy with the result and plan on having a play with this brush/technique combo to see how detailed I can make it. I'm on the lookout for a similar style of brush that's a little bit smaller so I can try the technique out in more detail. I can feel a tutorial video coming out of this discovery, maybe early in the new year, so keep your eyes peeled if you are interested. In the meantime any advice or suggestions are welcome, I can't be the only person to have 'discovered' this technique.
Posted by BigLee at 12:00