British Officers for the Anglo-Zulu War 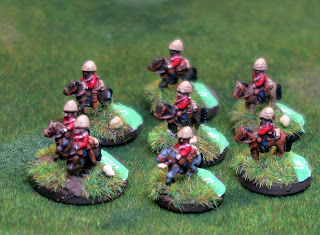 I am currently flitting between a wide range of projects at the moment but I have managed to get a little bit of painting done. The latest finished work is a new addition to my Anglo-Zulu War collection. When I painted up the companies of infantry - a couple of years ago now - I never made enough leaders for my British troops and so I decided to get some done at last...better late than never! These are from Baccus and compliment the foot officers I already have.

The cliched image of the British officer during the Anglo-Zulu war is one of a bumbling idiot. Certainly, the ruling classes and their offspring did not cover themselves in glory during this campaign. They vastly underestimated their enemy and paid a hefty price as a result. But the British army was changing and the Cardwell reforms meant that more and more officers were being appointed based on merit, rather than their ability to buy a commission. However, change was slow as many officers had bought their commissions before the reforms and because new appointments still had to be able to fund the lifestyle of an officer. However, on the whole, the quality of British officers did improve during this period. It's true, leadership at the battle of Isandlwana was poor, but it shouldn't be forgotten that the same day, later in the afternoon a different quality of leadership was on display at Rorke's Drift. I think it's fair to say that the quality of officers in the army during this campaign was a 'mixed bag'.

I will no doubt paint some more officers at a later stage but these are ideal for the time being.
Posted by BigLee at 12:58