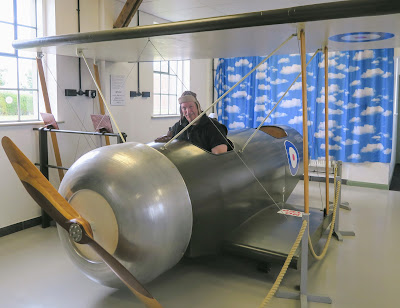 On Sunday I was treated to a day out with the family to visit the Stow Maries Great War Aerodrome. I've wanted to come here for a while but the weather always seemed to be bad, or we were too busy, so its taken a while to finally happen. I wasn't expecting to find much here because its a relatively new museum but I was pleasantly surprised by the range of exhibits and the quality of the displays. And unlike some museums they are well set up to keep kids (big and small) happy.

The airfield first opened in 1916 in response to the first Zeppelin raids on London. It was home to B Flight of No 37(HD) Squadron, Royal Flying Corps who remained here until 1919 after the RFC became the RAF. After the First World War the site became a farm again and remained farmland until 2009 when it became a designated conservation area. Finally in 2012 the surviving buildings were given Grade II* listed status. The Museum has received significant Lottery Funding in recent years and is well staffed by volunteers making this a surprisingly well restored site with some very interesting exhibits, replica aircraft and vehicles. They also run site tours throughout the day (included in the entry price) and our guide walked us around the site in a tour that lasted over 90 minutes.

As a working airfield the site is used regularly throughout the year and they have a long list of events including a Heritage Day in September providing free entry to the site. If you live near enough I would strongly recommend a visit as there is a lot to see and the site tours are excellent.
Posted by BigLee at 07:14