Following on from my post earlier today listing my resolutions from 2012 and the new ones for 2013 here's a quick run down of my gaming year. Twenty Twelve was a busy and pretty productive year for me although it didn't start well from a gaming point of view. My job (the real one, that pays the bills) has been growing and developing all year and I have at times struggled to fit in time for painting and gaming. But looking back I have still managed to get a lot done. 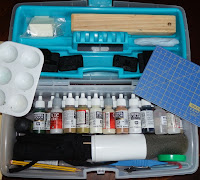 Oh my, January...shudder! I was ridiculously bust at work in January with two intensive business trips taking me away from my family and my painting desk. Free time was a luxury I didn't have, games were missed and I got virtually nothing painted. However this fraught period also inspired me to put together a Mobile Painting Box which has enabled me to get some projects completed while I travel or in work during my ever decreasing lunch-breaks. I was able to use the kit to great effect before the month was out to paint some Battlefront MG Bunkers.

Things settled down a little at work and I got my first proper game of the year with the Rejects. The Battle of Mackenzie Ridge was a defeat for my side, but I didn't care because I had a great time in good company. February also the first of many museum visits with the family with trips to the War Horse Exhibition at the National Army Museum. The Rejects also attended our first game show of 2012,  Cavalier.

This was the month when I got my hands on the mini handbook version of the new FOW 3rd Edition rules. I also ran my first Prize Draw in March (something I'll have to repeat this coming year) and in the middle of the month I took my youngest daughter to Skirmish in Sidcup. This was also the month when I painted a heard of dead cows! But the most exciting thing about March was the fact that I had tickets for the very first Tiger Day at the Tank Museum in Bovington. My Brother-in-Law and I made a long weekend of it and visited the D-Day Museum at Portsmouth on our way.

The month started with another large set piece game with the Rejects. The Battle of Boars Back Ridge was the start of what turned out to be a run of bad luck on the games table that made me question my faith in random number generation. April also saw completion of a long running project to paint a company of US 101st Airborne Rifle Company another visit to the RAF Museum at Hendon and of course Salute. The month was the rounded off quite nicely with another Rejects game, The Battle of Salutesville with three invited guests; Curt from Analogue Hobbies; Tamsin the Wargaming Girl and Sebastian of Back to the Minis. April was also the month that the Delvers branched out into a new game, the Marvel Heroic RPG. 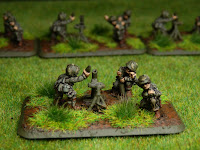 I completed quite a few painting projects in May, including an US Airborne LMG Platoon, a Mortar Platoon and an objective marker or two. I also managed to re-base one of my Panzergrenadier Platoons although sadly I still haven't completed the companion platoon (I hang my head in shame!). I also visited the Combined Military Services Museum which holds an excellent collection but also has an annoying photography ban. I ended the month with the Southend Air Show and a visit to Fort Amhurst. 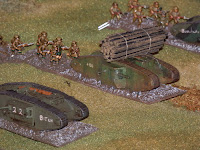 June was a big month for the Rejects as we put on our first ever Demonstration game at the Broadside show. We ran a WWI Battle of Amiens game and it seemed to go down well with show attendees, winning us 2nd place in Best in Show! This was also the month when I kicked my museum day trips and living history events into full gear with visits to Queens Own Royal West Kent Regimental Museum, Upnore Castle, The Royal Engineers Museum, and the Spar Valley Railway. However I did also manage to get some painting done, completing a Tom Meier Giant that dated from 1977!

I played my first 10mm Boar War game with the Rejects in June. This got me thinking about smaller scale gaming and the idea began to take root as the year progressed. June was also a significant moment in the life of this blog as BLMA reached half a millions hits. As the month drew to a close I missed a Rejects game as it clashed the War and Peace show which I had been planning on attending for some time. I went over two days and even that wasn't enough. Next year I may try to go for three days but I'll have to see what my schedule looks like first (meaning I need to bribe the wife into letting me out to play on my own!)

Following on in quick succession from War and Peace were several other events that I visit in August. These included the Military & Flying Machines event in Rainham, and the Spitfires & Merlins Airshow at Duxford. I was also able to sneak in another visit to the Muckleburgh Collection in Norfolk while on the Family Holiday. It wasn't all museums though as the Delvers continued to experiment with various board games and I began to consider seriously running a HEX game. 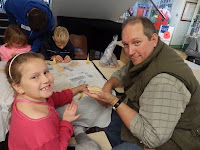 I was back at Duxford in September for the big Air Show of the season and decided to become a member of the Friends of Duxford as I'm sure to revisit many times more. The family also visited the 1940's weekend at Chatham Docks. We also rounded the month off by visiting the second Skirmish show of the year. I'm not sure what my wife made of it all by my youngest daughter seemed to enjoy herself building an Armourfast tank with a little help from yours truly. 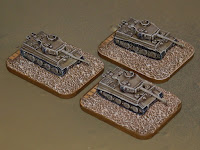 The month kicked off with another Rejects 10mm battle, this time set in the early days of WWI. By now I was finding myself with an itchy trigger finger and very few models left to paint. As all wargamers know one should never paint your last model so I planned some serious retail therapy to take place at the SELWG show at Crystal Palace. As it turned out - with a little help from the other rejects - I found myself buying 6mm Micro Armour! Before the month was out I had decided I wanted to play FOW in 6mm focused on the Western Desert in WWII and was painting my first 6mm tanks. I also enjoyed a work related meeting held at the Brooklands Museum. 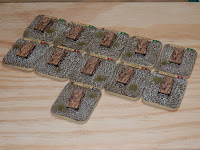 As the autumnal conditions took hold here in England the family and did one of our last Museum visits of the year, this time at the Science Museum. This was also the month in which the Dice Gods turned their backs on me. The Battle of Hal was a fictitious 'what if' game set in the aftermath of an allied defeat at Waterloo. My cavalry took what can only be described as the ass-whooping of a lifetime as dice roll after dice roll went against me. The only plus to come out of this game was that I bought a huge collection of 6mm figures from fellow reject Smiffy. By the end of the month I was already painting whole companies of 6mm Italian tanks.

This month has been somewhat quieter although I have managed to paint several platoons of German Tanks including Panzer III J's and Panzer IV F²'s. I also completed the core of a British 8th Army Infantry Tank Company and started work on a troop of 25 Pounder artillery. This latter project has stalled a bit over Christmas as the inevitable family activities have pushed gaming and painting to one side for a while. Mind you its not all bad because we went to see The Hobbit before Christmas and I loved it.

Well there you have it, that was my gaming (and other activities) year. I'm tired just thinking about all of that and I have plans for a lot lot more next year. Thanks for coming along with me and I hope I can continue to share my hobby interests (and everything linked to them) throughout 2013. I'd just like to sign off by thanking everyone again for following and reading my Blog and wishing you all a very Happy New Year.
Posted by BigLee at 14:51