Let's start by stating that I'm an idiot. Unequivocal and no argument from me I assure you. Why? Because I booked a weekend away that clashed with one of my favourite game shows in my calendar, SELWG at Crystal Palace. Ray, Postie and Dave went to this year's event and the closest I got was a voyeuristic 'lurk' on Rays Blog. It looks like I missed a great show and I'm more than a little gutted. Don't get me wrong, I enjoyed my weekend away with the family, but we could have had just as much fun the following weekend, but somehow I didn't register the date when we booked the hotel and the rest, as they say, is history. Numpty!

So while the lads were enjoying themselves at SELWG I had to content myself with the excellent Norfolk Tank Museum amongst others (six museums in three days!). Spending a couple of hours climbing on and in their tank collection was good fun, but not quite the same as attending the show and meeting friends. So 'Plan B' is to attend Warfare in the middle of November for my last big wargaming fix before the long dark winter months close in. This will be my first visit to this particular show and my last chance to stock up before the Painting Challenge begins in December. I expect to part with a lot of cash!

The new Operations Room should be largely finished by then and I can start getting some work done after weeks of self-imposed exile from my hobby.
Posted by BigLee at 16:45 13 comments: 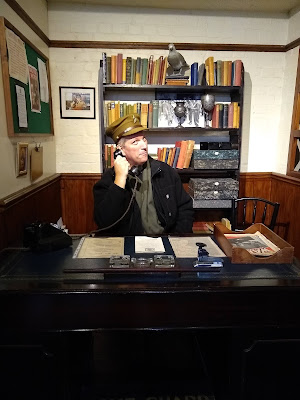 
The museum is Free entry (a rarity these days) and is open every Saturday from March 23rd through to November 30th and on Tuesdays in the Norfolk School Holidays, so October 22nd was the last Tuesday until July next year. Its run by volunteers and visitors of all ages are welcome. Its not a big museum, just two rooms a tea room and gift shop so allow about an hour for your visit...but do visit, its very interesting and if you have ever seen the series it's guaranteed to have you quoting "Sill Boy" and "Do you think that's wise?" and a dozen other catchphrases.
Posted by BigLee at 11:24 4 comments: 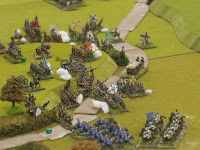 Reject HQ saw two battles over the weekend when I faced off against Mr Rousell (of Don't throw a One fame) in a set of linked games set in the seven years war. Postie has been running a few games like this recently, with a smaller game determining advantage to the winner in the second game, and it made for an interesting days gaming.

The Setup
As usual, we started by picking out of a metaphorical hat for sides, and I got the Russians while Ray would be the Prussians. I was clearly going to have my work cut out fighting a more experienced player and a better army (+1 morale rating for most of their troops, because they are better trained). I wasn't going to make it easy for Ray and if the dice gods looked on me favourably I might just pull off a win.... I'm all for positive thinking!


My Russians have 3 Points and the Prussians win with 4 points. Dammit! Earlier in the game, I thought I had that pesky Prussian!!

Analysis
The Prussians were able to claim a victory despite their unpromising start. We didn't know this but the surviving Prussian units would later join the main battle as reserve troops so could potentially give them a significant advantage. Whether this would be the case was yet to be seen.


Analysis
I can't say it went well for me (when does it?) but I did have a good time and felt I acquitted myself well, even if the dice let me down in the end. I like this set of rules that Postie has drawn up but I did feel I was bloody unlucky at some crucial moments. Such is war and wargaming and yet again I'm left thinking I probably should have taken up fishing instead!
Posted by BigLee at 08:30 16 comments:

A few weeks ago I reported that I was starting work on setting up a small games room at home. With the eldest daughter leaving home and the youngest 'upgrading' to a larger room, space has finally opened up for me to claim as my Operations Room. Progress has been steady but slow, with several weeks just to clear the room of furniture and unwanted stuff. This first stage is now complete and I have started decorating proper. Yippee! This stage is going to take a while as I have to do some work on the old plasterwork before I even think about painting. However, in the meantime, I have been busy making a shopping list of furniture items I want for the room. My existing painting desk and chair will be relocated to the new room, but I have my eye on new storage and shelving units.

I did try to set up a workspace years ago before the Young Padawan was born. But back then I found this a very lonely experience, buggering off upstairs on my own while the wife on her own downstairs. Not really fair on her and a bit anti-social for me. Fast forward 20 years and we both need our own space. I hasten to add this isn't a reflection of a deteriorating marriage, quite the opposite in fact. I guess a long and successful marriage has made us more relaxed about giving the other partner space. Unlike when we were younger we've grown quite relaxed in each others company and don't feel threatened when one or the other needs a bit of solitude or needs to work on something alone. And I have a technological solution that will keep us in contact, no matter where we are in the house (more on that in a moment).

My wife grew up with the TV on in the background and is quite content to have it on all evening, most of the time just as background noise. However, I'm one of those individuals that find the TV very distracting and the only way I can avoid it - to concentrate on painting or reading - is to put on a pair of headphones and listen to music or podcasts. It doesn't block everything out though and I still find myself getting distracted and before I know it most of the evening has been 'wasted'. Don't get me wrong, we both have favourite TV programmes, enjoy watching old films and new documentaries, I just don't want to spend 6 hours of an evening in front of the gogglebox! Escape to another room in the house is the only option for me and finally, I have a chance to do just that.

So back to the technological solution. I've ordered myself a Google Home Mini. Actually, I got one for free because I'm a long-time customer. I'm going to put this in the Operations Room so I can listen to podcasts or music ' hands-free'. Particularly helpful when I'm painting or up to my elbows in modelling putty.  A second unit downstairs will enable the wife to 'broadcast' when she needs me, rather than having to shout to get my attention. I'm sure the ability to summon me by voice command alone will appeal to her! Of course, the privacy implications of having a constantly 'on' item of voice-activated intelligent software in the house hasn't passed me by, but I'd like to give it a try. I'd be interested in other peoples experiences if they have this sort of setup in their hobby space.

It's occurred to me that this post has basically been a rather long-winded way of saying that I haven't done much painting recently (well, not the miniature kind anyway) because I have been busy decorating. Nothing much is likely to change in the next few weeks as I push to get the room finished, carpeted and then stocked with storage units. I will be heading over to Reject HQ on Sunday for a game but that will have to sustain me for a few weeks while I work through the necessary evil that is DIY. The payoff - may target if you will - is to have the room ready and operational by the start of the Painting Challenge in mid-December. Fingers crossed!
Posted by BigLee at 12:24 8 comments: