I'm a long way behind my fellow bloggers is posting pictures from this years Cavalier Show in Tonbridge but I have finally found time to review and post them. The show seemed a lot quieter this year and by mid afternoon there seemed to be very few visitors around. Maybe this was because there were some significant missing traders this year but I also heard that there were roadworks through Tunbridge Wells. Whatever the reason there were definitely fewer people at this years show which is a great pity.

As usual I took a load of pictures and for a change I also played a Participation game (and won!) along with fellow Reject Ray. More on that later but now here are my photo's.


All in all a great day out and a great start the start of my wargaming year.
Posted by BigLee at 22:08 17 comments:

Bringing and Buying at Cavalier

I'm on holiday this week and for nine whole days I can relax a little, catch up on some sleep and spend some much needed quality time with my family. We have lots of plans for trips out as usual, culminating for me with a visit to the Cavalier show in Tunbridge this coming Sunday. Like many others this will be my first show of the year after the long desolate months of winter (the last show I attended was SELWG back in October) and I'm really looking forward to it.

This year I'll be selling some of my 15mm WWII vehicles on the Bring and Buy stall. I've had varied success with B&B's at other shows; sometimes selling everything and other times bringing most of my stuff home with me. Hopefully I'll have better luck this time and to that end I have deliberately kept the prices down to ensure a sale. Here's what I'll have up for grabs:

Selling models can sometimes be a matter of personal finances but this isn't the case with this sale (although the money will be funnelled back into other projects). I simply need to clear some space and have decided that my 15mm stuff has had its day and its time to move on. I've no doubt that at some dim point in the future I'll regret flogging my figures, but right here and right now I'm sure this is the right decision. In fact I sold half of my 15mm WWII collection late last year so selling off what remains isn't that much of a wrench.

I have selected a few special pieces to keep in my display cabinet so its not all going and I have a couple of Panzergrenadier Platoons and a US Armoured Rifle Platoon yet to sell. I'll get rid of these at a later date.
Posted by BigLee at 09:18 3 comments:

Time for some more Italian targets aircraft for my Desert Raiders project. These are 1/300th models from Heroics and Ros. As with the Bombers I painted up a few weeks ago the primary purpose of these is as objectives for my LRDG and SAS raiders to destroy. As with the larger planes these models do not have undercarriage modelled and as I want these to represent parked aircraft I had to improvise with small wooden blocks underneath. Although you can see these in the following pictures from above (the normal viewpoint of the wargamer) they can't really be seen. 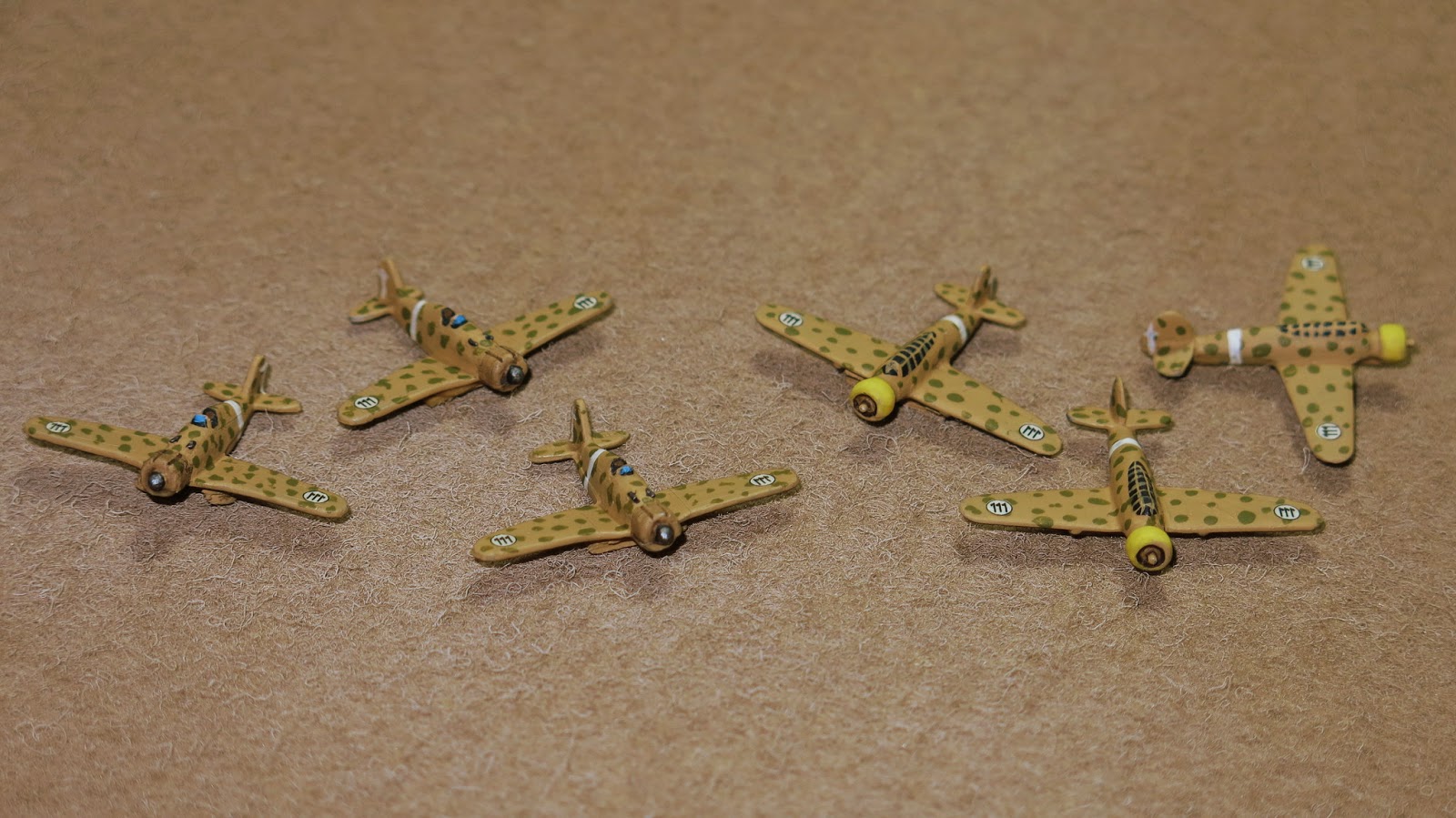 I have painted two types of Italian Fighter planes that saw service in North Africa leading up to the period I am working on (Late 1942). First off are three Breda Ba.65's, an all-metal single-engine, low-wing monoplane used primarily for ground attack roles. These were on old aircraft by 1942 having first seen service during the Spanish Civil War. Most had been destroyed by 1941 but a handful continued in service beyond that date. I decided to have a small group because their ground attack role compliments the Bombers I have already painted. 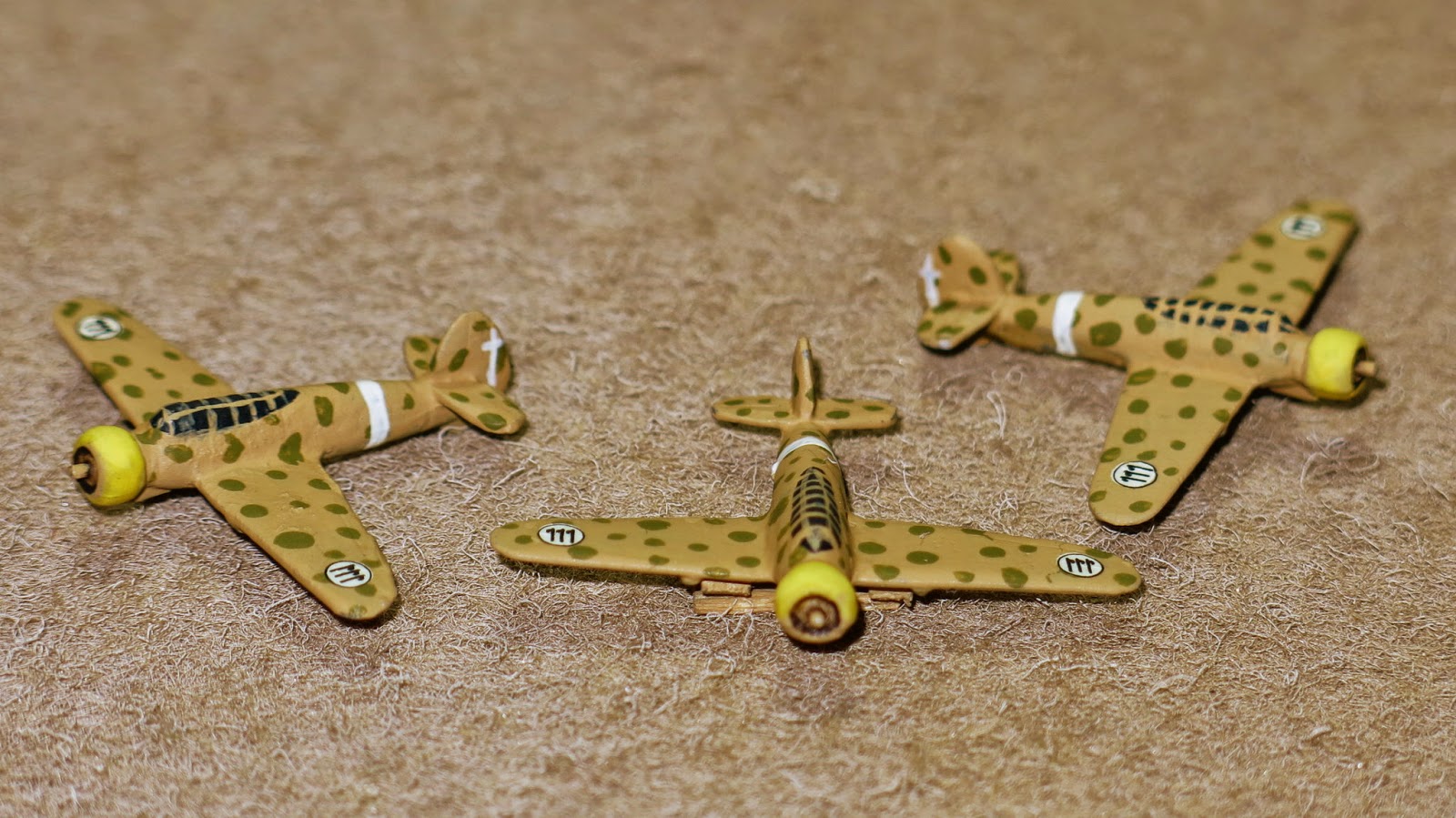 Next up are three Fiat G50 fighters. First flown in February 1937, the G.50 was Italy’s first single-seat, all-metal monoplane with an enclosed cockpit and retractable Undercarriage to go into production. Like many Italian aircraft of the period they were very manoeuvrable but lacked fire-power (two 12.7 mm (0.50 cal) Breda HMGs). They were far from useless however and in the hands of skilled pilots could be deadly. 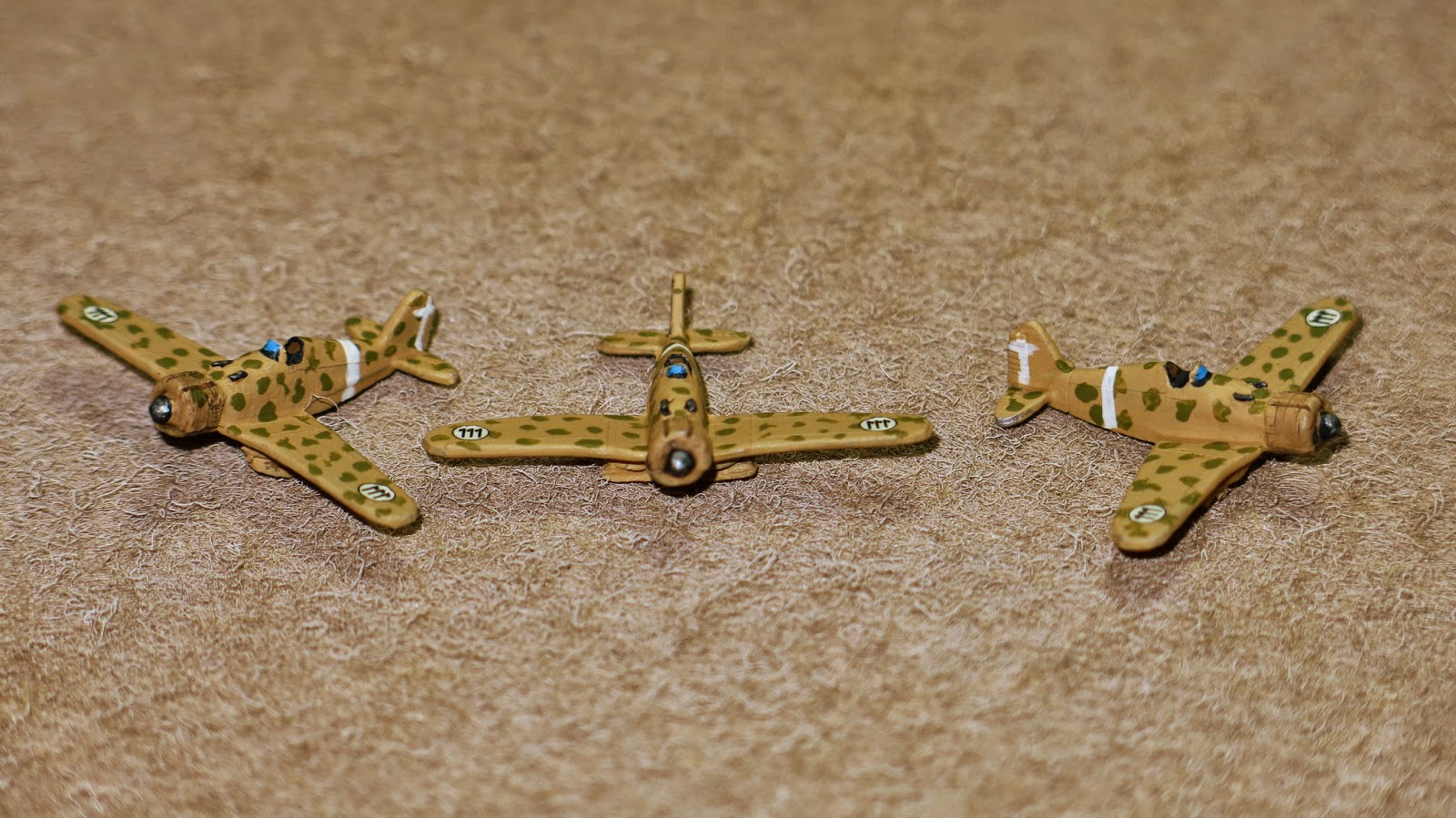 The Battle of Fort Tinta

On Saturday Posties Rejects gathered in a very cold shed-o-war to fight an Anglo-Zulu War game with our hosts 6mm collection. We would be fighting a what-if scenario based on actual forces and topography from the period.

The Setup
On 21st January 1879 the advancing British No 4 Column built and garrisoned a stone fort overlooking the crossing known as Tinta's Drift on the White Umfolozi River. From this base of operations the garrison sent out strong patrols. However upon learning of the disaster at Isandlwana the fort was vacated and the column fell back to a fortified camp at Khambula. Our scenario asks what would have happened if the British had instead tried to hold and reinforce the Garrison rather than abandon it?

Analysis
At times this felt like a one sided battle, but Zulu casualties were still very high. Tactically the battle was a draw with both sides suffering significant losses, but this was undoubtedly a strategic victory for the Zulu's. With the loss of this forward base at Tinta Drift the British would be forced to withdraw or face assault throughout the dark of night without the benefit of their long range fire-power or prepared defences. There was quite a bit of 'discussion' about the scenario played and the definition of victory (I think the British players were feeling a bit hard done for!) but for me the answer is simple. Historically the Garrison at Tinta Drift withdrew without a battle to safer positions and denied the Zulu's battle. The whole point of this scenario was to ask what would have happened had they stood their ground. The answer appears to be that they would have been forced to withdraw anyway, so their decision to pull back was probably the correct one.

For me this makes the game we fought even more interesting because the way we approached the scenario was completely contrary to how a field commander would have viewed the situation. In the game the Commander of the relief column (Mark) decided not to even attempt to reinforce the Garrison, and the Fort Commander (Surjit) decided to stand his ground rather than retreat. Both players reacted like wargamers, seeking the best and most interesting game, rather than as military leaders husbanding their forces and avoiding a fight they couldn't possibly win. Of course that doesn't explain the decisions and outcome of the battle at Rourke's Drift, but I guess that's what dice are for...
Posted by BigLee at 08:32 14 comments: