I had to share this picture of my my messy desk if only to shame myself into tidying it up! I normally have a much more ordered work space but at the moment I have multiple periods and multiple scales taking over. Actually things could be even messier because I have ordered some 6mm Romans from Baccus but I'm still waiting on delivery for these.

It has to be said though that some of this isn't even my mess, its my daughters! The 40k Termagants (I think that's what they are called?!?) are her first attempt at proper painting, using simple but core techniques like dry-brushing and washing. I'll post more detailed pictures when she has finished the bases. Also hers is the tentacled beast in front centre. She has yet to undercoat that but has already learnt the hard way that poorly cast resin can be a nightmare to clean up!

The 15mm Churchill tank in the foreground however is mine. Although I have sold a lot of my 15mm stuff I had a few unpainted models that I wanted to keep to paint for display rather than gaming. I'm painting this as a 'Kingforce' MkIII, hence the reference pictures stuck around the top of my desk. The base for the Churchill has being painted separately and can be seen in the top right. Also present on the table are the two 6mm Timecast buildings I bought at SELWG. I have cleaned them (I wash everything prior to painting to remove grease and release agent) but have yet to undercoat them. There are also some 15mm sci-fi figures that I picked up at SELWG (another Shiney moment!). I haven't done anything with these yet, beyond wondering why I picked them up! Last but not least there are half a dozen 6mm Italian Vehicles nearing completion. I'm not basing these as they are 'set dressing' only, not game pieces. These will be placed around my Italian airfield as parked vehicles.

Part of the reason for my lack of progress this week has been my sudden and completely unexpected social life! Thursday evening Ray, Tamsin and I met up with Miles over from the US on business. We enjoyed an excellent Greek meal and an evening of even better conversation. One of the single greatest rewards of writing a Blog like this is the people I have met and the friendships it helps forge. I have made a lot of friends through my Blog (including the Rejects) and now I can add Miles to a growing list of international friends. Hopefully he can make it over here next year for the Salute show and a game with the Rejects.

Clearing the paint desk will have to wait a while as I am off on a short holiday from tomorrow. Nothing fancy, just a few days in Clacton to see family and do some retail therapy away from home. Hopefully by the time we get home my miniatures from Baccus will have arrived and my painting desk can get even more cluttered!
Posted by BigLee at 12:24 7 comments:

During my visit to the SELWG show earlier this month I had a chance to play Simon Miller's To the Strongest rules. My daughter and I played a hard fought 70 minute game and we both thoroughly enjoyed it. We were playing against three veteran TtS players and almost their first action was to assassinate our General! Despite this we pressed home our attack and gave them a run for their money, although in the end we still lost. We'd had a great game and went on to enjoy the rest of the show but then a few days later Simon posted Emily a signed copy of the rules. A most unexpected and typically warm hearted act of generosity that has most definitely got the creative juices flowing! 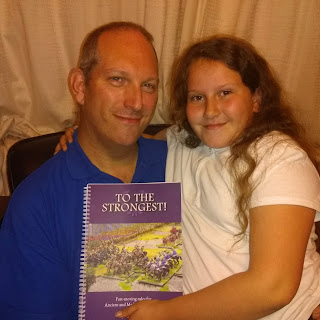 I'm considering having a go at painting two armies for these rules using 6mm figures. I have seen various posts online showing that other gamers have had a similar idea and that the rules will work with this scale. Why 6mm? Well the reasons are the same as those that drove me to that scale for my WWII games. Its cheaper, can be painted quicker, requires less storage space and can be played on a smaller table. Bit of a no brainer as far as I am concerned.

I have been discussing the idea with my daughter, and she's definitely eager to play To The Strongest again. We aren't rushing into this and are spending time discussing periods and armies before I commit time and money. However we seem to be gravitating towards the Second Punic War and the battles of Hannibal verses Rome. When I told my daughter about the use of war elephants her eyes lit up and she seemed very eager to command some nellies!

Whatever we choose I'll probably do most of the painting, but where possible I'll get her involved so we can get a game on the table as quickly as possible. I'm not abandoning my 6mm WW2 North Africa project (in fact I have a few new ideas in the pipeline for that) but I now have a second period to fire my imagination, wet my appetite and drain the bank account!
Posted by BigLee at 13:29 29 comments:

By popular request here's a picture of my daughters SELWG Loot. A much larger haul than mine...oh the shame! She isn't collecting for any particular game at this stage, but wanted something a bit sci-fi. Over the winter months I'll focus her interest to find a game we can both work on together. I said I needed a new project but never realised it would be my daughter! 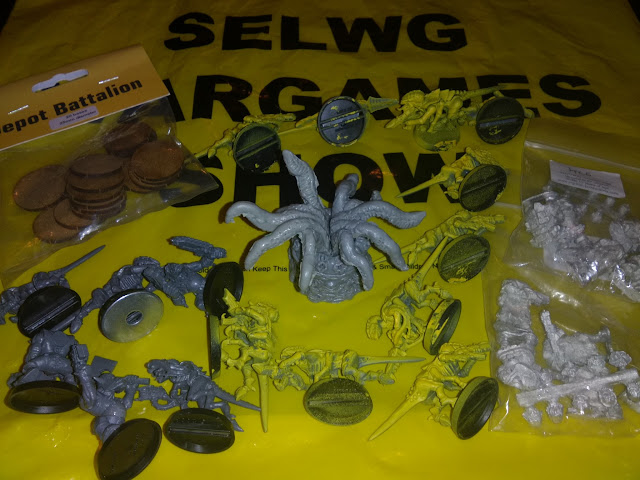 The tentacled creature in the middle is from Infinity Engine and will make a nice centre piece for a game as well as being fun to paint. The various plastic GW figures were from the Bring-and-buy. These will also be good for painting practice. She also bought two sets of metal sci-fi figures (sorry can't remember who from!) and some bases from Colonel Bills. I have a load of spare paint she can use and more brushes than you can shake a stick at...so when I have shrugged off this cold that has taken grip I'll sit down and have a proper painting lesson with her.

Hmmm...maybe I can get her looking at some Weird War Two games...a sci-fi spin off from my own collection. And I even have the right colour pallet in my paint collection! Any suggestions folks? Preferably 28mm skirmish level gaming?
Posted by BigLee at 08:32 11 comments:

Just a quick post to show off my meagre haul from SELWG. Having nearly completely converted to 6mm wargaming my shopping opportunities are always going to be limited. 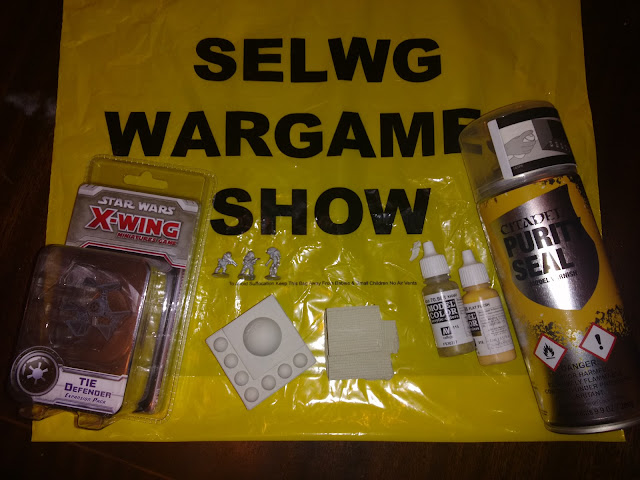 So what did I buy. Purity Seal varnish is still pretty much the only GW product I buy on a regular basis. I also restocked a couple of Vallejo paints I needed...so far all very conventional. I also picked up another Empire starship for X-Wing but resisted buying more...for now. I collected a few freebie 15mm sci-fi figures to try out. And just before going home I picked up two 6mm buildings from timecast, a large mosque building and an Italian villa. The latter will be used as a settler farm in Libya. A small shopping bag but some nice stuff non the less.
Posted by BigLee at 20:05 5 comments:

This morning I headed to down to Crystal Palace for the SELWG show. This year I brought my daughter with me as I continue her induction in the (ig)noble art of Wargaming! We actually arrived about 45 minutes early - this turned out to be a good thing because the car parking was very restricted this year - and as it was a beautifully bright and crisp autumn morning we decided to hunt some Dinosaurs before the show opened.


After our brisk walk around the park we were ready for SELWG and joined the queue just as it started to be let inside the hall. 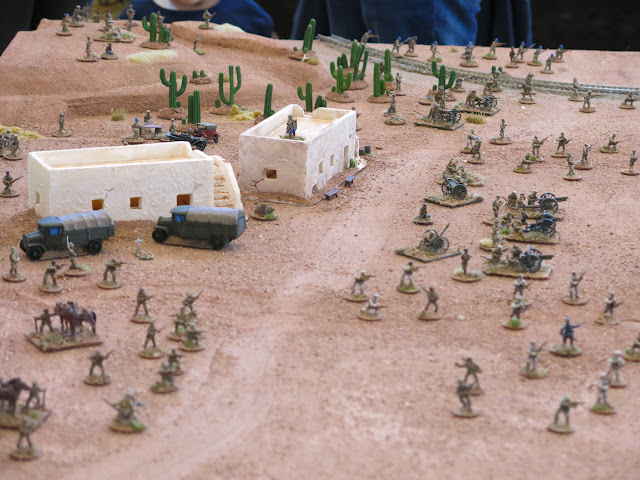 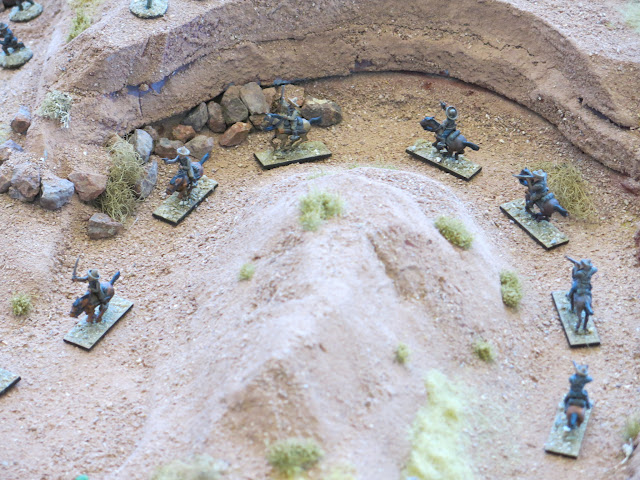 We had a great day, met some great people and spent some money...in fact Emily bought a lot more miniatures than me!
Posted by BigLee at 19:42 17 comments: 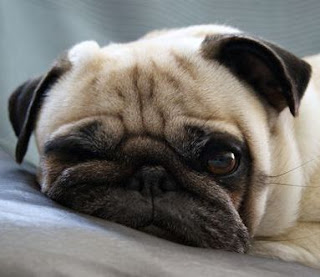 I'm in a bit of a funk at the moment. I'm not talking "needing medication" depressed, I'm just feeling at a very low ebb (this is just a phase folks, not an illness). I guess we all have periods like this when things get on top of us but for the last few weeks its been like a dismal cloud hanging over me. It's a combination of a lot of small things rather than any one big issue but the end result is that I haven't slept well in weeks. The cumulative effect over time means that when I get home from work I'm too tired to be bothered with anything other than falling asleep in front of the TV and can't motivate myself to do anything creative.

Just ignore me... this is self indulgent, self absorbed moaning about nothing and everything!

The net result of this funk is that BigLee's Miniature Adventures has been a bit quiet of late, and for that I apologise. Inspiration has been low and I have run out of things to paint - in the same way the women "have nothing to wear"! I have the usual lead mountain stashed away in various boxes throughout the house but nothing is speaking to me at the moment and I can't seem to get the motivation together to do anything. Which is why I need a good show like SELWG to buck up my spirits and reignite the fires of inspiration! 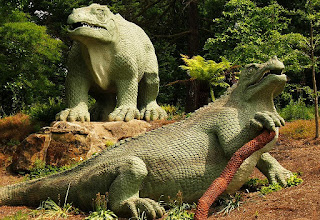 I'll be bringing my daughter with me this year (the Young Padawan that so effectively demolished me in her Guest Post last month) as I continue her indoctrination in the Tao of Wargaming. I may be an embarrassing dad in public but get her in a room of other wargamers and hopefully she will realise I'm not that strange after all! I have been making a modest shopping list and am looking forward to seeing some great games (and maybe playing some too) and meeting a lot of old friends. And after we have finished inside the show we are going to hunt some Dinosaurs in Crystal Palace Park.

Now if that doesn't cheer me up nothing will!
Posted by BigLee at 10:30 14 comments: