How many dungeon crawls have you played that include a staircase descending into the darkness of a lower level? If you've been playing D&D (or one of the many spin off RPG's) as long as me I'd hazard a guess that this situation has occurred hundreds of times. In some ways the classic spiral stairway is just a means to ascending or descending to another level of the dungeon or another floor of the castle. However it can also be argued that this is not just a terrain feature but also a well used plot device and a potent symbolic image.

The idea of descending into the underworld, of testing oneself against the unknown and the darkness, is probably as old as humanity itself. Descent into caves, or into some other subterranean lair, has time and again been used as a rite of initiation for warriors and sages alike in many different cultures and myths. It’s therefore not surprising that spiral stairs regularly feature in dungeon crawls and adventure stories. 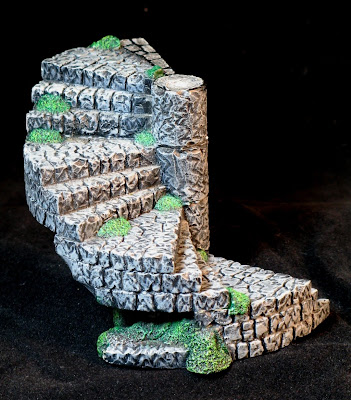 This Spiral Staircase is a model that I painted years ago but recently revived and touched up. Initially it was part of a rather poor Diorama I made probably 15 years ago and subsequently spent years in storage. Unfortunately (or fortunately depending on your point of view) the model got broken in storage and I decided to scavenge the recoverable parts for a more active role as dungeon terrain.

Because I bought this Resin terrain so many years ago I can't recall who it was made by. The stairs are ideally suited to 28mm models and the whole thing stands about 5"/12cm tall. It is quite sturdy and can easily accommodate metal miniatures on each of it's 'landings' without becoming unbalanced. As a terrain piece it makes combat on stairs both easier to work out and visually more exciting.
Posted by BigLee at 08:01