My Daughter and I had a rematch of Pirates CSG last night. Last time we played I was out maneuvered and eventually outgunned. Since then I have bought a few more packs of this simple game and increased our collective fleet from four to over a dozen vessels. So this time when we played we had more choices and therefore 'upped the ante', as they say.


We each selected a fleet of 70 points, including crew. Once again I took command of the Pirate fleet and was able to select six vessels and a handful of crew from the available options. My worthy opponent selected a similar sized fleet from the remaining ships, representing the British, the USA and Spain. The logic (such as it was) behind this motley selection of ships was they had banded together to rid the seas of the pirate scourge. If only it had worked out that way. 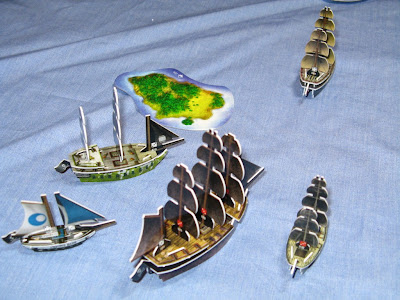 I split my fleet into two groups of three vessels each and devised a simple plan... let my opponents inexperience wreak her fleet in a pincer movement. So my ships stayed close enough together to be only a move apart but far enough that it looked like she could divide and destroy me. She fell for the ruse and within a few turns I had sunk one of her ships and crippled another giving me a significant tactical advantage. Notwithstanding the fact that I was playing against a 13 year old I took that advantage and ruthlessly pressed home my attack! Quickly wheeling my fleet in pursuit I chased her ships all the way back to their base island where I destroyed them, one vessel at a time. I tried not to gloat. Honest. 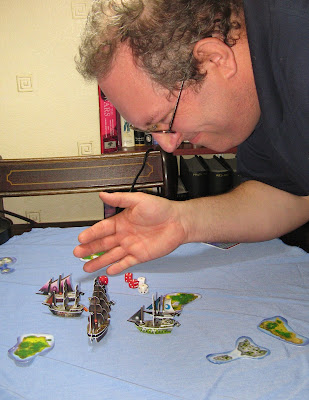 Now it could be argued that this harsh lesson in wargaming was a little cruel for a father to inflict on his daughter. But I consider it a good life lesson. Never trust dad when he's holding dice. Besides, victory was sweet after the humiliating trouncing I got in our last encounter!
Posted by BigLee at 08:01