A while back my good friend and fellow blogger Derek gave me an excellent book of Wartime posters form the Imperial War Museum. Fit Men Wanted includes 64 full page reproduction posters along with some details on the back of each. These are fantastic early examples of what would now be called 'public information announcements' although today we would recognise them as outright propaganda. I have lots of these type of posters, both in books and as real and reproduction examples in the Newlyn Collection. So I thought I'd share some examples here on BLMA as part of an occasional series. I have used some of these scans, shrunk down and printed to an appropriate scale, on models of wartime buildings. 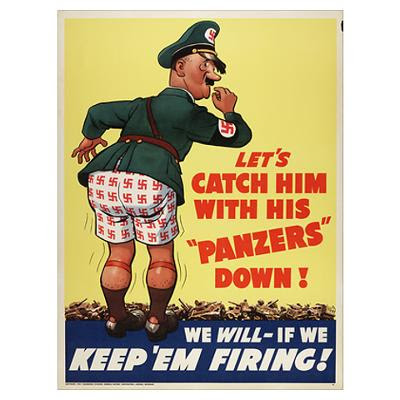 The first one is a picture I featured here way back in 2009. I have since bought a reproduction copy of this poster (although it is available in the Public Domain) because for me its one of the best examples of allied propaganda. As well as conveying an important message to workers it also ridicules and belittles the enemy at the same time. This one was designed by an unknown artist for the Oldsmobile Division of General Motors Corporation and no doubt gave munitions workers a few laughs.
Posted by BigLee at 14:48