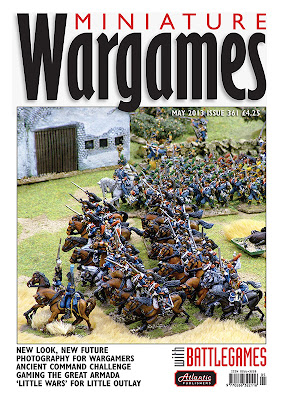 While I was at Salute on Saturday I made sure I picked up a copy of the new and improved Miniature Wargames magazine. As you probably already know this months issue is a relaunch (of sorts) as the magazine now incorporates that other stalwart gaming magazine Battlegames. In addition to absorbing Battlegames the new magazine has also acquired the editor, the redoubtable Henry Hyde. I was lucky enough to bump into Henry towards the end of the show and quickly wished him luck with the new venture. Now that I have seen the first combined issue I'm reassured that the new magazine is in very safe hands.

The 'new' magazine retains a lot of the features regular readers already enjoy but very much in the simple and elegant style of Battlegames. Wargaming is very much at the heart of every article and is no longer relegated to a footnote at the end. That's not to criticise the old format, I enjoyed it a lot, but sometimes change can bring with it new vitality and reinvigorate an old warhorse, or in this case two old warhorses.

So, the verdict. I like the look of this revamped magazine, I enjoyed the articles and the features and there was plenty of eye candy as well. The layout is simple and clean so it looks, paradoxically, both rather modern and slightly retro. I also liked the fact that on the whole the advertising was isolated away from the articles, not mixed in with them as in some magazines. I actually enjoy the adverts (its a way of getting a feel for the hobby and the latest developments) but its not something I like to see in the middle of an article.

The quality of the writing is also an important part of any magazine (obviously) and the articles in this issue grabbed my attention from the editorial through to the closing pages. I really felt at the end that I was better informed about the current state of our hobby as well as being inspired and energised by the games featured.

It was a thought provoking and inspirational issue and has convinced me I needed to subscribe after years of buying as-and-when I found a copy in a newsagents. And this time I have opted for my first digital subscription so I can read it on my Android Tablet. I recently gave away a huge collection of magazines and couldn't believe how much space was taken up with paper copies that frankly would never see the light of day again. I kept them more out of sentimentality than anything else and they were starting to fill the shelves. So opting for a digital subscription may prove to be the way forward for me, although I'm clearly years behind the trend.


Update: I forgot to add that with the digital subscription from Exact Editions you also get access to a load of back issues of both Miniature Wargames and Battlegames. I've already found a couple of cracking articles from previous issues, including a great one by Henry about the war in the Western Desert.
Posted by BigLee at 08:01