As soon as I decided to work on recreating the armies of 1942 North Africa it became clear that eventually I would need some new terrain. And aside from rocky hills and the occasional Oasis probably the most ubiquitous terrain item that might feature in my games would actually be infantry defenses of one kind or another. This means barbed wire, tank traps, gun pits and of course lots and lots of minefields.

Barbed wire is most often associated with the battlefields of WWI but it also played a large part in shaping the battlefields of Egypt and Libya. Huge areas of desert were mined and wired off and every  fixed infantry defensive position was usually protected by its own minefields and row after row of barbed wire. There are special rules for its use in the FOW rule book but the pre painted models for 15mm wargaming are not suitable for 6mm battlefields. So I knew from an early stage that I would need to make my own minefield defenses, and I would need to make a lot of them.

I started by making a single test piece to see what sort of problems I encountered and to try out some alternatives for things like the barbed wire boundary lines. Initially I thought a single thread of 'barbed wire' (the sort sold by model building suppliers) would look good but in the end I decided I wanted the boundary's marked by rolls of concertina wire. I also soon realised that I would need to drill and fix plenty of upright posts to hold the wire in place and this would all have to be done before adding the textured surface and painting. 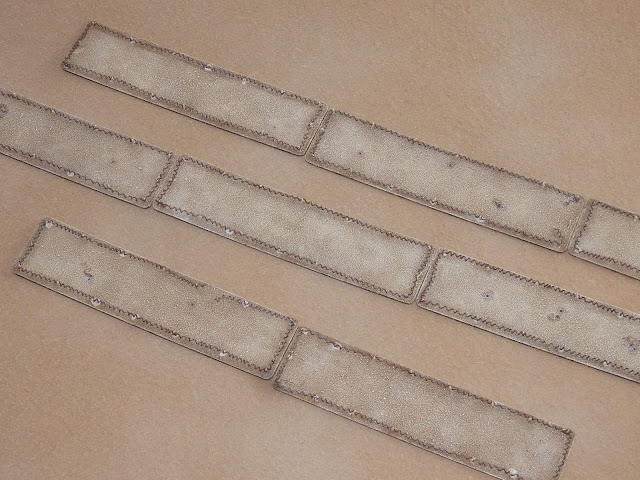 The posts were spaced approximately 2cm apart and consist of 0.5mm model wire glued into pre drilled holes. The wire was clipped off about 1cm in height and these would be trimmed down later once the model was assembled and fixed. The sand texturing was the added and when dry I drilled a few larger holes (about 1-1.5mm across) in the mdf which would later be painted as small craters to show mines that had been exploded. The whole base was then painted and dry brushed to my normal figure base colour formula

The next step was to make the barbed concertina wire. To keep the coils to the correct scale I wound the wire around a stretched out paper clip so the total height of the coil is no more than 3mm, which equates approximately to waist height for 6mm infantry figures. I made several meters of these coils then sprayed them a dark reddish brown (a car paint from Halfords) and then dry brushed them with gunmetal to bring out the 'barbs'. These were then cut to 20cm lengths and glued onto the bases. 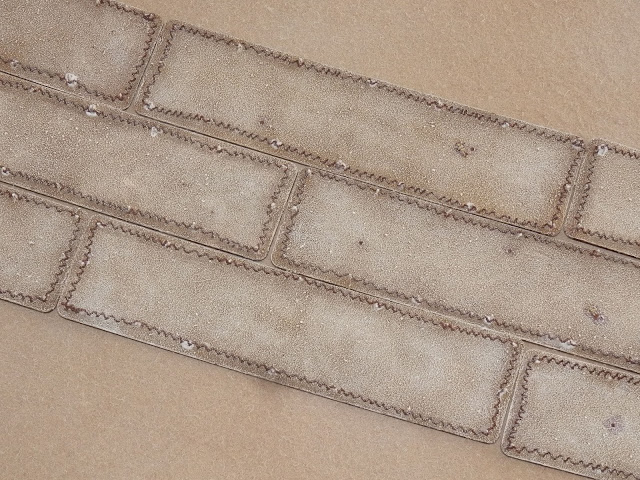 The models were almost finished now and all that was required was to trim back any over large wires, and touch up any exposed metal. I thin painted in some scorched blast marked in the small craters I had made and added a couple of dead bodies and small items of lost equipment. The final stage was to spray the bases with a couple of coats of GW Satin Varnish and when dry a final dusting of Testors Dullcoat.

I have made ten of these 8"x3" minefields which should be ample for most games.
Posted by BigLee at 06:30