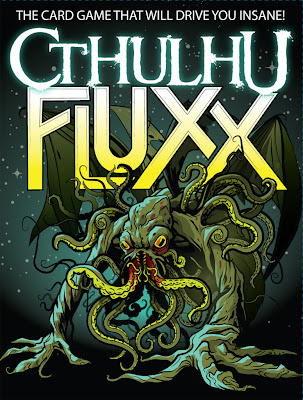 The Delvers gathered on Friday for a game of Cthulhu Fluxx. I bought this game last week at Salute and this was its first outing. We played the original Fluxx game a few months ago and I have been keeping an eye open for this Mythos version for some time.

This is a self contained card game (none of that collectable nonsense) published by Loony Labs. There are a 'family' of Fluxx games on the market and the general concept is the same throughout them all. As players play cards from their hands they modify the rules of the game with those cards. This may mean that the number of cards a player draws or can hold in his/her hand may change as the game proceeds. All the rules you need to play are on the cards before you but with those rules constantly in a state of change (hence the name Fluxx) this is an easy game to play but a devilishly hard game to master. Throw in a few elder gods and you have a recipe for utter madness!

"Explore the dark and horrifying mysteries of the unknown as you battle insanity and fiendish cults in Cthulhu Fluxx! Follow the wild-eyed Poet, the obsessed Artist, and the expeditions of the Professor as they investigate Eldritch Secrets no mortal was meant to discover. Someone has stolen the Necronomicon from the library at Miskatonic Univeristy, and a Farm in the hills is undergoing a horrifying Metamorphosis. Meanwhile, unspeakable abominations stir in Penguin-riddled Tombs beneath the ice. Are you Inevitably Doomed to a lifetime of Nightmares in the Sanitarium, or are you, in fact, a Secret Cultist, worshiping the Minions of Darkness?
(Source: BoardGameGeek.com)

The box contains 100 cards and a simple rule sheet, but as already stated most of the rules are on the cards themselves. The game is designed to be played by 2-6 Players but the optimal number is somewhere in the middle. Most games will last about 30 minutes but a lot depends on the number of players involved, the draw of cards and whether players start to gibber uncontrollably mid play.
Posted by BigLee at 06:43