I have just finished watching one of my favourite films Ice Station Zebra. Released in 1968 and directed by John Sturges, this twice Oscar Nominated film is a loose adaptation of the Alistair MacLean cold war novel of the same name. 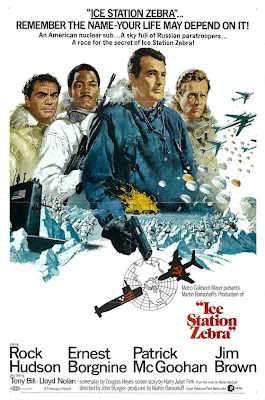 A Soviet Russian satellite ejects a capsule containing microfilm that both the USSR & the USA wish to get their hands on. Unfortunately the capsule has landed in the Arctic and both sides operatives in the area are out of contact. Worse still their base Ice Station Zebra is issuing a distress call with garbled news of an explosion. In comes Captain James Ferraday (Rock Hudson) of the US nuclear submarine the USS Tigerfish. Given orders to head to head north to the Weather Station he soon acquires various passengers including; a British agent Mr. ‘Jones’ (Patrick McGoohan); a Marine platoon, Captain Anders (Jim Brown) who takes command of the Marines; and Boris Vaslov (Ernest Borgnine), a Russian defector, spy and ‘associate’ of Jones.

The Journey is filled with intrigue, sabotage, a journey beneath the polar ice and a cold war standoff above it. This film has it all as far as I am concerned; iconic actors; a tense tightly written script; kick-ass special effects that still look good in the CGI age; and a really simple but strong story.
But today I was watching it from a gamers perspective and thinking to myself what great material the story is. I know I'm not the only person to have had a similar idea as this games table from last years Salute clearly shows. 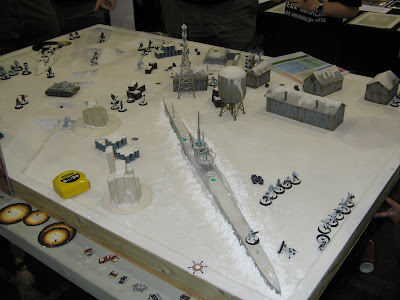 So what sort of games could be derived from this iconic film? Here are a few ideas:

...or you could go for something a little more 'alternative' and mix this story with a Lovecraftian theme and come up with a variation on the story At the Mountains of Madness.

If you haven't seen this film before I implore you to keep an eye out for it on TV or buy a copy on DVD. You won't be sorry and you may even get a few game ideas from it yourself.