"Most kids are brought up being taught how to kick a football, but I was brought up painting my first model!"

Us gamers are often stereotyped as middle aged, fat balding geeks with no life. While some of this may be true (time marches on etc) this fails to take into account the fact that a whole new generation of players are entering the ranks. I recently asked my daughter to put down a few words about her experience of playing D&D from her perspective as a 'young' player. This is what she wrote:

"My dad got me interested in D&D when I was little, and since then I’m hooked! I enjoy all the game shows he takes me to, (even after the 100th time at the same stall) and even read his geeky comic book's (Order of the stick and Dork tower). I know that I’m not the only young person that enjoys D&D, as my cousins have enjoyed playing the dungeons and dragons board game I got for Christmas." 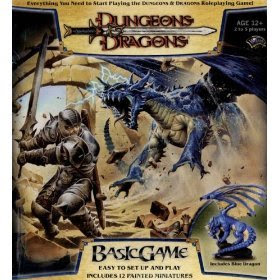 "Young people can enjoy D&D as much as anyone else, and I believe my little sister is next in line to be moulded into a skilled role player. My friends give me weird looks when I say anything to do with role-playing or models, so I suppose [most] people my age won't get into D&D popularly for a while... Whenever I’m taken to game shows, I usually find the majority of [kids] there are boys, so I find it rather likely that it will be a while till girls my age start taking any form of role-playing seriously. To be honest, I think gaming should be for kids of any age, as it’s a good way to spend your time and get you thinking"

I'd add to that last observation that role playing games in general involve a whole range of skills that benefit those that play. Communication skills, listening skills, basic math, probability, strategy, planning, teamwork and creativity are all exercised playing and running role playing games. I can think of few other activities that can benefit a growing mind in so many ways at the same time.
Posted by BigLee at 11:39