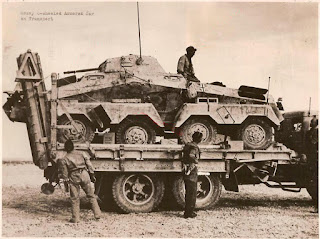 I've finished another unit to add to my North Africa collection, this time some SdKfz 231's otherwise known as 8-Rads. These Schwerer Panzerspähwagen or Heavy armoured reconnaissance vehicles were loosely based on the earlier 6 wheeled versions (unsurprisingly called 6-Rads) and saw service in all theatres of the war. This was an all wheel drive vehicle with independent steering to improve manoeuvrability off road. Although armed with a 20mm cannon and co-axial machine gun the 8-rad was primarily a recce vehicle and would only be expected to engage with enemy reconnaissance units.


I've also been working on several other projects and hopefully I'll have something else to show you in a week or so. I've started on an 88mm Anti Tank Platoon and may have this finished within the week. However I'm waiting for one model to be delivered (I needed an Kfz 15 Staff car) and may have to finish off the rest of the platoon and paint this at a later date when it arrives. I'm also working on several terrain projects include some designs for Minefields. I'm doing some test pieces now and if all goes OK I'll showcase my efforts in a few weeks. And while I'm doing all this I'm still churning out more Smoke Markers. So all in all I'm quite the busy boy at the moment!
Posted by BigLee at 07:31