One of the things I definitely want to recreate in my desert games is poor visibility. This can be caused by several factors such as heat haze, sun glare, or simply because the viewer has sore and tired eyes. However the single biggest factor in determining visibility is dust. Time and time again I have read first hand accounts that say that it was not uncommon for observers to find it impossible to discern vehicles in a dust cloud until they were almost upon them. Dust clouds might conceal a whole company of vehicles or they might just be the result of strong winds, deciding which may be a matter of life and death. If I want to accurately recreate the mayhem and confusion of the desert war it is clearly vital that I make provision for dust clouds on the table.

Making Dust Clouds
Battlefront make a set of dust cloud models for their 15mm models and I wanted to replicate this if at all possible for my 6mm forces. This meant making my own models as I have been unable to find anything suitable for micro armour. I experimented with several ideas but eventually settled on what turned out to be the most labour intensive - but aesthetically pleasing - method for creating dust clouds. I tried using fur but it just didn't look right to me. I also had a go at dying cotton wool and synthetic stuffing material to make dust clouds but again I just didn't like the result. In the end I fell back on the tried and trusted method I used for making my smoke clouds, painted clump foliage. 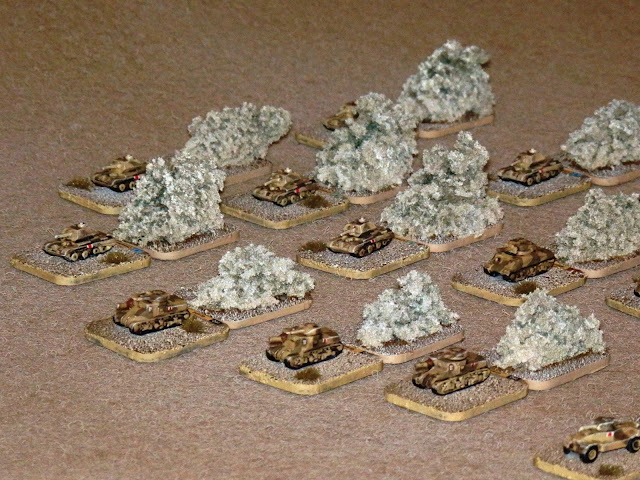 This first batch haven't quite come out how I wanted them but I know what to do on the next batch. The main problem is that under the bright glare of a flashgun some of the green foliage can just be seen peeking through the deepest recesses of the models. Its not noticeable in normal light but for the next batch I will soak the clump foliage in PVA mixed with sandy coloured paint rather than just water. Hopefully this will saturate the clump all the way through and provide a 'built in' base-coat on which to paint. I haven't tested this method yet but I will report on my results when I do. Having said this I still think these look pretty good and I'm really happy with them. 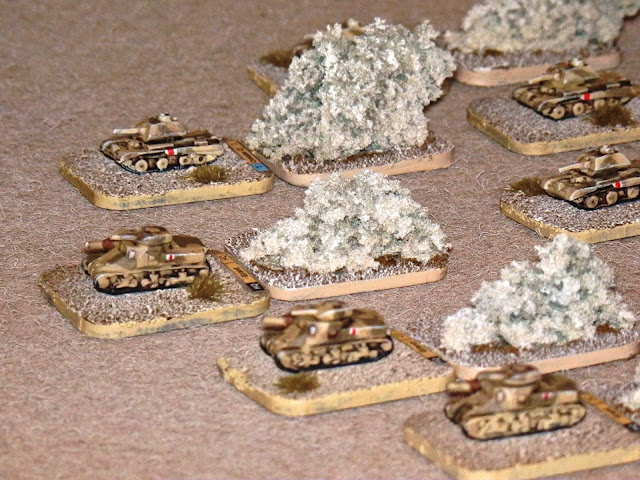 Rules for Dustclouds
The FoW website defines the rules for dust clouds in their 15mm games thus:

Place a 2”/5cm diameter Dust Cloud marker behind each vehicle moving more than 4”/10cm in the Movement Step. If the vehicle moves later in the turn, the dust cloud moves with it staying on the same side of the vehicle, even if it changes direction (you can’t hide in your own dust!). Vehicles moving 4”/10cm or less do not create dust clouds. Remove all dust clouds from your vehicles at the start of your turn. Troops behind a dust cloud count as Concealed.

The problem with this definition is that it doesn't actually mask the unit kicking up the dust (although it does provide concealment to those behind) and that just doesn't tie in with the documentary evidence I have read from the period. So I propose the following house revision of the 'Dust' rule for my 6mm games which incorporates some of the rules on smoke.

Unidentified platoons outside line of sight are represented by Hidden Markers until spotted. Once spotted, place the observed units on the table. Place a dust cloud (small base) marker behind each vehicle moving more than 4” in the Movement Step. If the vehicle moves later in the turn, the dust cloud moves with it staying behind the vehicle.

Remove all dust clouds from your vehicles when movement drops below 4" or less.

This should mean that until line of sight can be established there is some element of uncertainty regarding the cause of the dust cloud. Once identified as an enemy unit the dust and heat haze make accurate targeting of the lead vehicles difficult and therefore provides concealment to them. It is is even harder to see units behind (ie through) a dust cloud and the effects are comparable to targeting through smoke screens. So it can be seen that a wily commander could used advance reconnaissance vehicles to mask following units in its dust plume. This doesn't make them invisible, but it does make them harder to target accurately.
Posted by BigLee at 09:16