I was chatting to a friend the other day about my North Africa 1942 Project and he asked me why I chose that particular moment in the Desert War to focus on. To be honest he stumped me for a few seconds because when I got started late last year I picked this particular point rather quickly without really understanding my motivation for it.

So I pondered his question for a moment and reviewed the things I had wanted to recreate on the table. The mix of vehicles with Panzer IV's and US Grants and Sherman's coming onto the scene is an important factor. As a painter I was definitely looking forward to working with these tanks as well as some of the older machines still in service at this time. I'm also a bit of a Montgomery fan and you can't be an admirer without also having a special affinity for his first big victory. But when I really thought about it, the simple reason I'm so interested in this particular point of the Desert War is that it was a turning point.

Like Stalingrad on the eastern Front, El-Alamein was an unequivocal disaster for the Germans and marked a clear and decisive change in the direction of the war. There would be many more disasters like this ahead for the Germans, as Churchill prophetically announced... "Now this is not the end. It is not even the beginning of the end. But it is, perhaps, the end of the beginning." 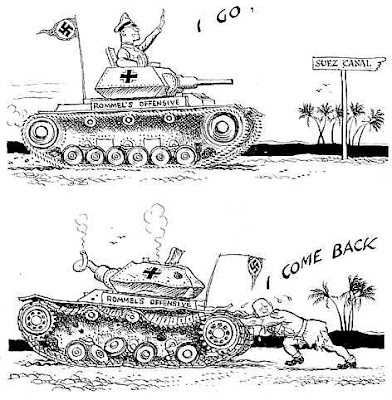 So if I'm really honest it's the fact that El-Alamein marked the end of the Benghazi Steeplechase and proved that while Rommel was certainly a tactical genius he most certainly wasn't invincible or infallible.
Posted by BigLee at 13:09