Some time ago I made a load of smoke and flame markers for my 15mm Flames of War tanks. I'd seen lots of ideas on-line for how to make smoke and flame columns for tanks that were destroyed and brewed up. My solution (and the tutorial I posted here) was an amalgam of lot of different ideas and yielded some solid durable models ideal for 15mm wargaming. The problem was that none of the markers I made were really suitable for my 6mm North Africa project. So I decided to make new smoke markers specifically made for 6mm scale vehicles, and this meant a different design approach was needed. 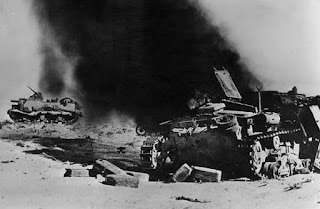 The Smoke columns I made for my 15mm models were far too large for 6mm vehicles and would not balance on top of tanks in that scale. I considered using black polyester stuffing material, similar to the 'official' smoke and flame material sold by Battlefront, but it just didn't look as good as the markers I made first time around. What I needed was a way to hold my new mini smoke markers over the vehicles without obscuring the tank itself. And the solution came to me in one of those rare 'Eureka' moments (well rare for me!) while sitting at my desk in work.

I decided to use paper clips, bent into a suitable armature, to glue the smoke column onto while holding it over the vehicle. The bottom of the paper clip forms a foot that slips under the model base, holding it upright. I have used ordinary medium sized (3cm) metal paper clips in these examples but you could use whatever you have to hand. Here are the steps I used to create my mini smoke markers.


The basic 'smoke marker' is now completed and the PVA has hardened to make a very durable and hard model. All that is needed now is to paint to your own preferred design. I just wanted oily smoke columns so I spray painted the models black (two coats to ensure all the green foliage was covered) and then dry brushed lightly with grey and a touch of white on the extremities. The last thing I did was to paint the wire base with Vallejo Dark Sand (847) to match the ground cover of my North Africa models. And here is the finished result...


I'm really happy with how these have turned out. Now I just need to make another thirty or forty!
Posted by BigLee at 06:30