BLMA gets a Dynamic Facelift 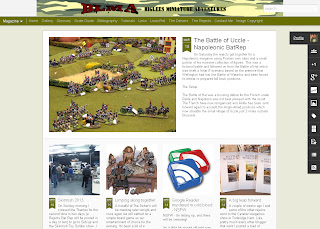 You will probably already have noticed that BLMA has been given a makeover, and I'd like to know what you think of it. Way back in 2011 Blogger introduced Dynamic Views as a template option for blogger Blogs. Although I liked a lot of what I saw I decided not to enable Dynamic Views because it wouldn't carry over many of the Widgets I had working in the sidebar. More importantly it wasn't possible at that point to insert a header picture which meant my 'hand crafted' logo art would disappear.  However most of my initial concerns have now been addressed and after some fiddling with the template design I decided to shift BLMA over to the new template.


One of the major benefits of this new layout it that it has increased traffic across my blog, literally overnight. One reason for this is that it is easy to see and access several of my most recent posts from the home page without having to scroll down to find them. This means that new visitors to the site are now presented with five posts to catch their attention rather than just the latest one and are therefore more likely to look around. I have also read (but con't confirm if this is true) that blogs with Dynamic views get a higher page ranking in Google Searches which also increases traffic on the site. Obviously my priority is to communicate with existing readers but if I can attract more followers and add to 'the conversation' then that isn't a bad thing.

Most of my sidebar widgets work fine in this new layout (now that I have tweaked them that is) and I have been able to fix the 'header issue' and insert my own artwork. The only problem I have encountered so far is that the new width settings have caused some minor formatting issues with older posts. I'm working on this issue now so hopefully that should be resolved soon. I have also opted to drop some of the less popular Pages to make the header bar less cluttered.

As with previous changes of layout I can promise a few things. Firstly BLMA will remain a non-commercial site, meaning no adverts. I doubt if I would ever have the sort of site traffic that would generate much income but from a purely aesthetic point of view I don't want the site cluttered up with  adverts over which I have no control.  Secondly BLMA will continue to feature lots of my pictures and in that respect Dynamic Views really is the best way to present my posts.

So what do you think? I'd really appreciate your views and feedback on the new layout and if there are any major problems please let me know and I'll do my best to resolve them.