Battle of Boars Back Ridge

The dust has long since settled on this game but I've had so many pictures to process and posts to write from last weekend that I have only just got round to writing this Battle Report. For an alternative review of the game check out this post by Ray on his blog Don't Throw a One! Ray was my brother in arms for this game as we both controlled the French forces defending the Boars Back ridge. The game was set in September 1813 towards the end of the Peninsular War as the Allied British and Portuguese forces drive Napoleons forces across the Pyrenness back into France. This fictional battle is supposed to represent a rearguard action by the French to delay the Allies and buy time for the French to escape.

The opening turns of the game were played in a heavy mist. Postie has a large curtain across the middle of his War Shed so that the opposing forces couldn't see either their initial set-up or movement for the first three turns. 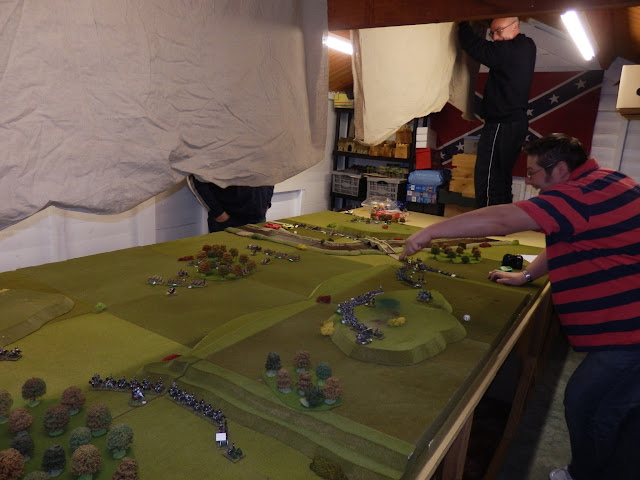 The fog didn't really effect those units on roads as they had the road as a point of reference. But for units crossing open ground the fog made keeping a straight heading almost impossible. At the beginning of each turn each column rolled a dice to determine its heading. This caused problems for the French as most of our units veered sharply to the right and ended up moving across the front of the deployment zones at right angles to the enemy. The British and Portuguese kept a more forward heading but not before two units of Guards and some cavalry marched through a wood, disrupting their formations badly. 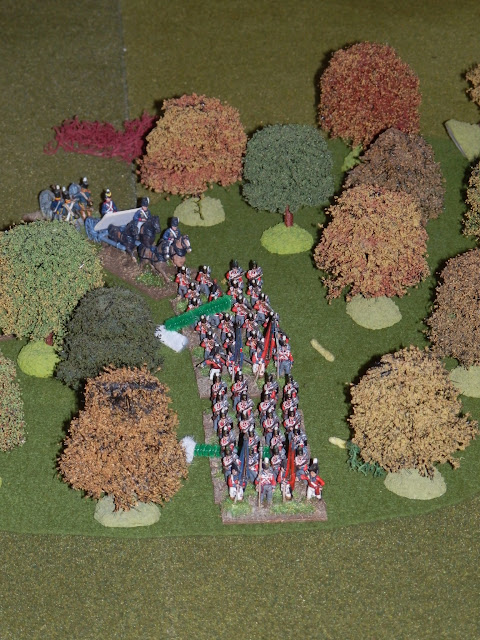 I commanded the French right wing and after some minor disruption due to the fog I found my Chasseurs pretty much where I wanted them and pointing in the right direction. Facing them within charge range were one unit of Dragoons. Both I and my opponent Fran decided the best action was to charge although I felt that outnumbering him two to one, with horse artillery in support, gave me an assured victory. My plan was relatively simple; once I'd swept this unit away I would be free to harass the British left flank and generally cause mayhem....in my dreams. The British Dragoons went through my Chasseurs like a hot knife through butter. Fran's dice rolling was godlike while I failed every flippin' moral test given to me. By the end of the second turn of combat my entire 2nd division had routed and left the field! 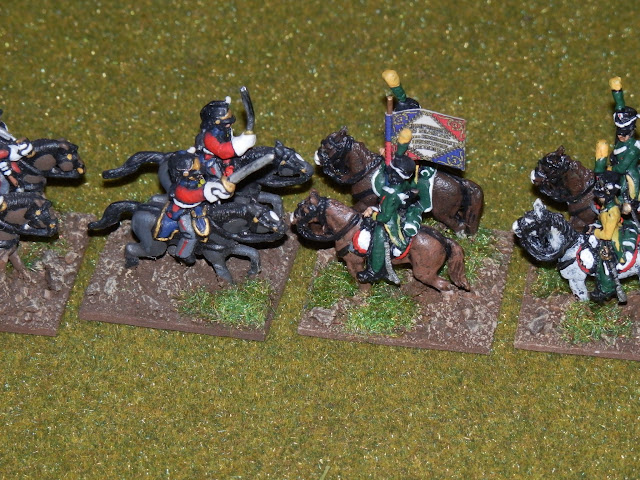 Needless to say this shook our confidence somewhat! But we were still resolved to give the Brits a hard time. Most of our infantry were arrayed across the top of a very high hill and our right flank under Ray's command were holding back the British advance across the bridge. If we could hold them back here we might hold out long enough for re-enforcements to swing the battle in our favour. Ray's dice rolling was better than mine but soon weight of numbers - and a secret ford across the river - meant that our right wing was at risk of being outflanked. 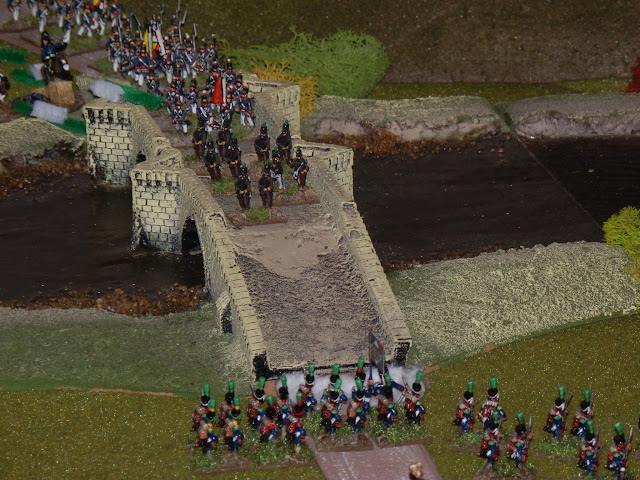 Additional cavalry began to appear but for us this was probably too late and in the wrong place. In effect we were feeding units into a battle of attrition that didn't allow us to take advantage of the cavalry's mobility. The battle for control of the bridge steadily grew in intensity as both sides throw more men into the fray. 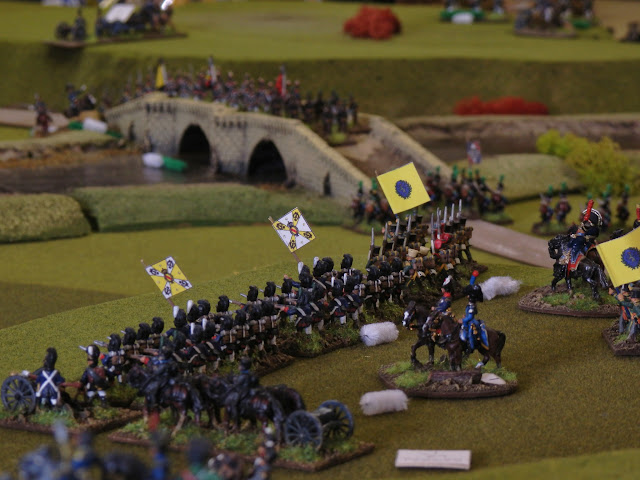 Meanwhile the British lines slowly advanced once they had overcome the confusion caused by their march through the woods. The French position atop the ridge looks impressive but facing us are British Guard and lots of them! 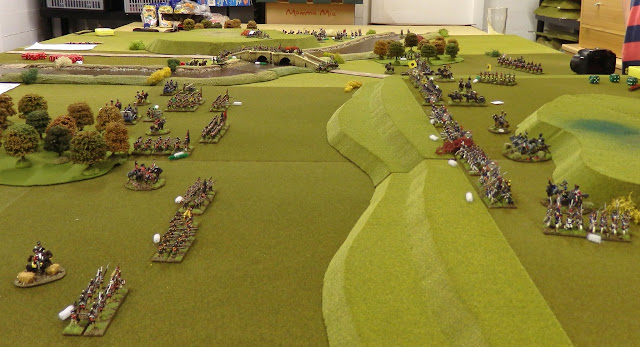 Posties young neighbour, Jack, joined us and took part in this game. He's a 40K player and I guess like most of GW's players had probably never encountered a historical wargame before. Despite being half our age the generation gap was bridged easily by the game and he seemed to enjoy himself. Hopefully we'll see him again at future games and maybe we have broadened his gaming horizons a little. 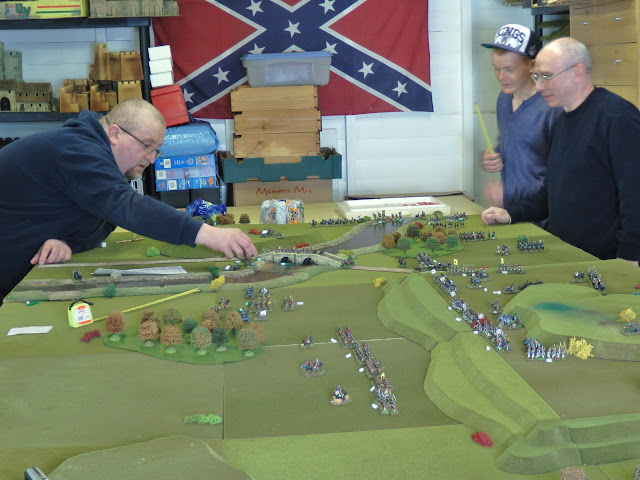 The British eventually force themselves across the bridge and begin using the hidden ford to feed more troops towards our flank. Retreat up towards the hill is looking increasingly like the only option but it also looks like a forlorn one. By this stage of the battle it felt like we were outnumbered two to one although the ratio was actually probably less than that. 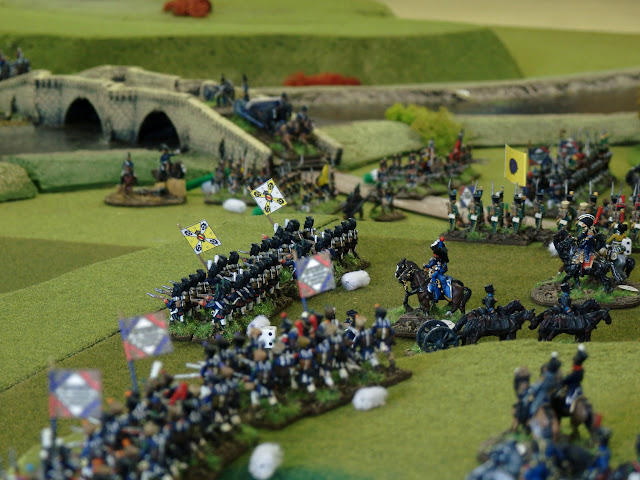 The British Guard force there way up the hill with every unit becoming disordered in the process. The French sense their moment has come and unleash their first fire into the disordered British ranks...but because I'm rolling the dice the effect is desultory and hardly dents the enemy! In hindsight maybe I should have charged the British in a do-or-die moment of madness... but facing two undamaged units of the Coldstream Guards I new we were unlikely to succeed. 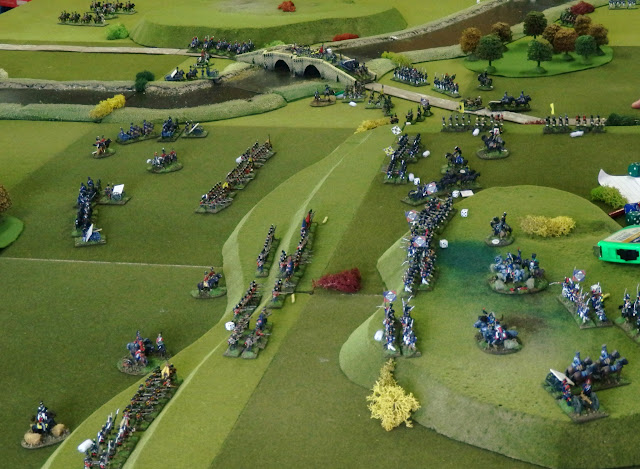 Eventually we threw in the towel. Victory was out of our grasp and all we could hope for was that we would hang onto the ridge for a few more rounds. Fran had played a blinder of a game with some uncanny dice rolling and a steady approach. 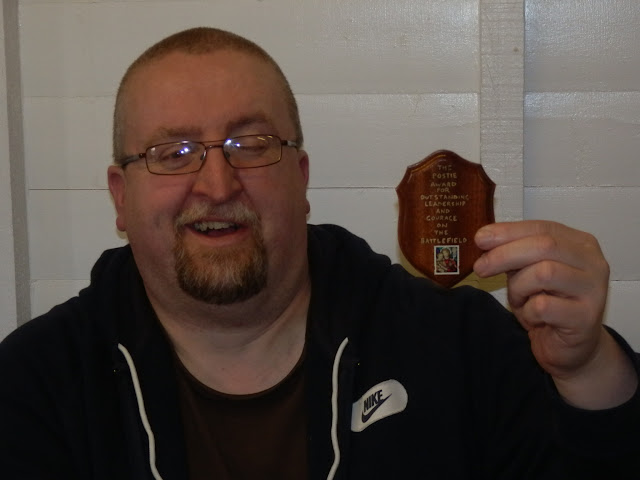 Another great game but yet another defeat for me. This is becoming a recurring theme! Seriously though, my dice rolling was so bad it was uncanny. Next game I think I need to sacrifice a goat to the dice gods or something.
Posted by BigLee at 13:42