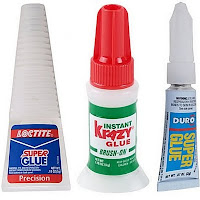 Super Glue or Cyanoacrylate is the name given to several fast-acting adhesives. The type found on hardware store shelves is either methyl 2-cyanoacrylate or, more commonly, ethyl-2-cyanoacrylate and is marketed as Superglue or Krazy Glue.

Cyanocrylate is actually an acrylic resin and hardens into strong chains of molecules in the presence of water vapour (actually it's the hydroxyl ions in water that are needed but you get the picture) - which is why it hardens when exposed to the air. This is also why superglue bonds skin to skin better than any other product - trust me, I know!

Most superglue bonds can be dissolved using Acetone or Acetone based nail varnish remover. When applying the acetone use a small quality at a time and do so in a well ventilated area. I have found the beast way to apply Acetone is with a Q-tip or cotton bud applied directly to the glue. This dissolves the bond without damaging the skin but you still have to be gentle when peeling the bond apart. Its also worth noting that Acetone de-fats the skin so make sure you wash with soap and water after use and apply a suitable hand lotion to the treated area of skin.

Because moisture speeds up the hardening process, breathing onto a bond will make the glue set quicker. Similarly there is little point using large amounts of superglue on a join because as the outer layers harden they form an air tight shell that stops moisture getting to the rest of the glue. It will harden eventually but the speed of the overall reaction will be slower. Water vapour will also effect the glue in your tube once opened. The best way to extend the shelf life of an opened tube of Superglue is to put it in an airtight container, like a small Tupperware box, with a packet of silica gel. 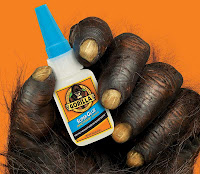 Cyanoacrylate glue has a low shearing strength, which means it can be used as a temporary adhesive where the bonded surface can be flexed or twisted off. I use it for instance when fixing sticks to models so they can be painted. I then twist the stick off when I've finished painting. Sometimes the glue can take a bit of effort to break but sufficient shear pressure will break the bond. The 'Super' in superglue comes from its Tensile Strength which means it can adhere incredibly strongly (doh!). So used on good fitting joints - especially those strengthened with a pin - the bond is virtually indestructible. Some manufacturers (such as Gorilla) have been able to increase the shear strength of their glue making the bonds much stronger where heavy handling is likely. Consequently this product has become a favorite of wargamers. 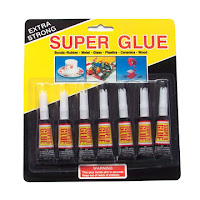 Superglue can come in liquid or gel formulations and they are essentially the same product and react in the same way. Gel is easier to use for modelers because it has less tendency to run and can be applied in a more targeted way. I've also found that superglue gel has better gap filling properties than the liquid version although this isn't always a benefit. Apparently (although I have never tried this) superglue can be added to baking soda (sodium bicarbonate) to form a hard, lightweight filler. However the chemical reaction is highly exothermic (heat producing) and can apparently result in the production of noxious vapors.
There are lost of different makes of superglue on the market, from the expensive versions by companies like Loctite or Unibond through to the cheep Seven4APound variety. So Which is the best?  This is actually a very hard question to answer, mainly because manufacturers don't routinely make their technical specifications available. It is probably best to try different products and make your own judgement based on the properties you want. It's also worth checking out various online Forums for anecdotal evidence on glue performance and for general advice.
Posted by BigLee at 09:01