I've finished painting a Sherman Platoon for my Flames of War US Tank Company. This version of the Sherman wasn't available until July 1944 and was rushed to frontline units as a result of earlier battlefield experience against heavy German tanks. The larger gun gave this Sherman some real hitting power and other changes (such as water jackets for the ammo storage bins) improved crew survivability. 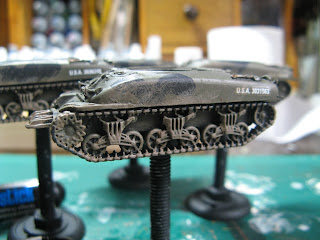 Secondary armament took the form of two .30 cal MG's and one .50 cal AA MG. However with a maximum armour thickness of just 62mm the M4A1 remained vulnerable in head to head battles with German Panthers and Tigers. However as with earlier models the real advantage of the Sherman was its speed and manoeuvrability and the fact that it was available in huge numbers.

I've painted two tanks up with Cullin Hedgerow Cutters fitted to the front. The hedgerows of the Normandy Bocage were a serious obstacle to movement of Allied armour. The Cullin cutters enabled allied tanks to plough through these hedges without exposing their weak underside armour. Ironically these accessories were often made from reused metal taken from German hedgehog sea defences. 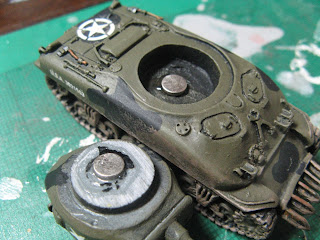 Here are the steps I followed painting these vehicles.
1) Cleaning flash and mould lines from all parts
2) Assembly using superglue and Epoxy Resin.
3) Washing in soapy water to remove all grease and mould release residue.
4) Spray undercoat with GW Black
5) Dry brushing with Brown Violet (887). Three coats applied to whole model with a large brush.
6) Dry brush with 50/50 mix of Brown Violet (887) and Khaki (988) to bring out detail.
7) Apply Black (950) to tracks and metal items such as machine guns and tools.
8) Drybrush tracks Gunmetal Grey (863), Machine Guns, Tools and other bare metal items.
9) Black (950) camo pattern added to Hull and Turret of vehicles
10) Details such as wooden tool handles in Black Brown (822) and Highlighted with Dark Sand (847)
11) Black lining using 1 part Black (950) to 3 parts distilled water.
12) Apply decals using softener - Allow 24hrs to harden and set
13) Dirt and mud effects added to hull and tracks using Tamiya 'mud' pens and acrylic paints.
14) Allow to dry for 24hrs. The Mud Pen effects in particular take a long time to harden.
15) 2-3 coats of Testors Dullcote spray, allowing 24hrs after the first and 12 hrs after subsequent coats.
16) Superglue Magnets inside turret cavity (making sure they are oriented correctly)
17) Sit back and admire. 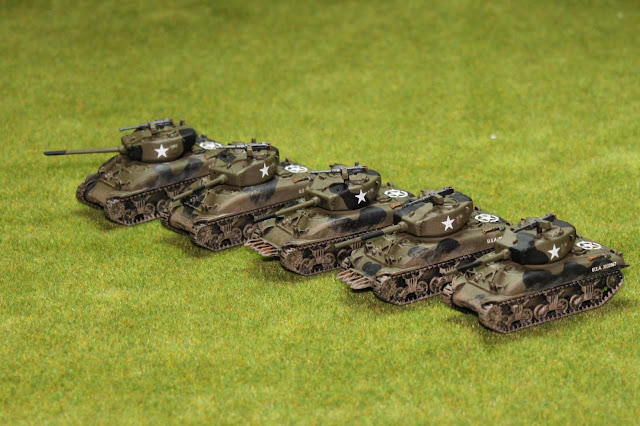 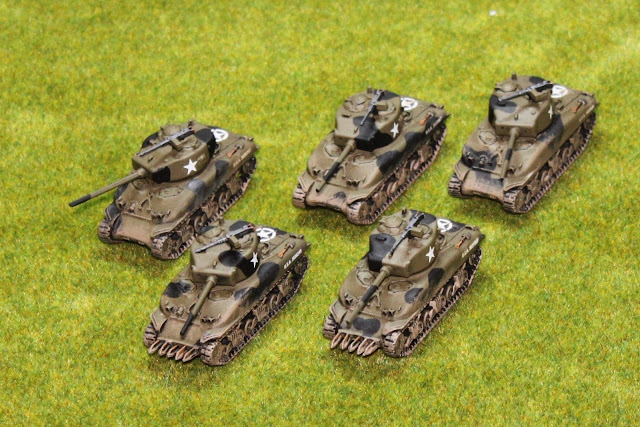 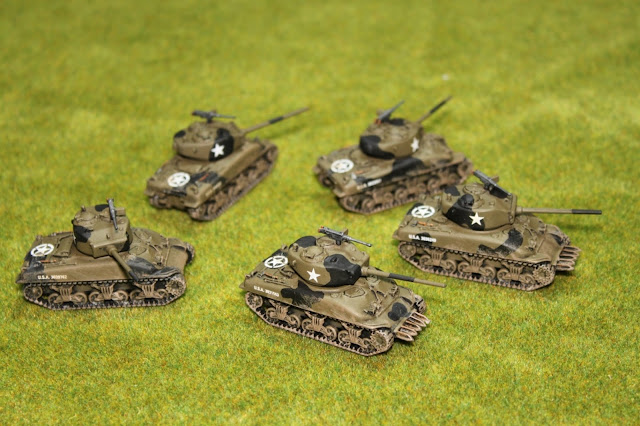 I've deliberately tried to make painting vehicles as easy as possible, with the minimum number of steps between starting and finishing the project. I've spent far too long gathering together my FoW figures and its time I 'stepped up production' and got serious about wargaming with my models.
Now all I need to do is focus on the next project which is already assembled and under-coated!!
Posted by BigLee at 09:01