Outpost is a movie set in the present, with a historical backdrop and a good helping of fantasy thrown in. It features Nazi Zombies (or Ghosts as the story suggests) in an abandoned SS Bunker deep in disputed territory in Eastern Europe. A team of mercenaries is put together to take a 'surveyor' to a facility his organisation has recently acquired. Their job is to get him safely to the site and allow him to do his job. Of course the reality of their mission is nothing like what any of them expected. 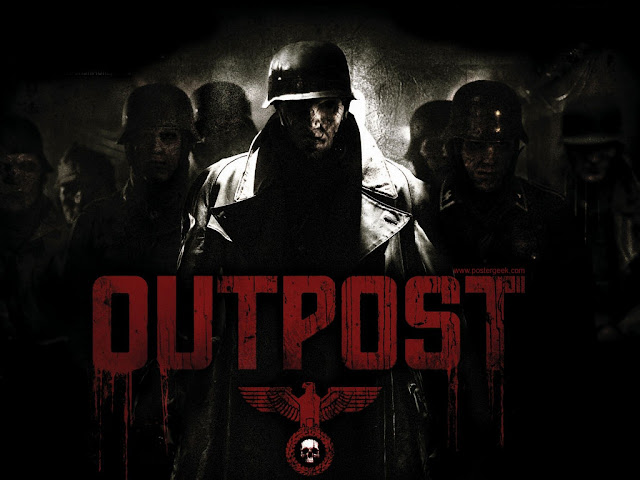 SPOILER ALERT: The 'surveyor' is actually a scientist who's life work has been trying to unravel the Unified Field Theory of physics. This proposed theory would bring together all branches of physics into a single discipline and (the film alleges) would give those with the ability to manipulate the 'unified field' incredible power. And in the great tradition of Weird War 2 a group of Nazi Scientists under the auspices of the SS achieved just that in the last days of the Third Reich. Their aim: to create an unstoppable army of indestructible 'undead' stormtroopers.
Now I like a good horror film as much as the next man but I have to admit to having an unreasonable fear of Zombies. Basically they give me the creeps like no other celluloid monster. I love to watch Zombie movies... but only with the lights on. This film had one of the creepiest Zombies I have ever seen, in the form of the SS Colonel. Despite not uttering a single syllable throughout the film that character stole the film and made for an iconic and terrifying foe.

Staring Ray Stephenson this is an excellent little Brit Flick funded on a shoestring but not lacking in suspense and chills. If you're into Weird War Two wargaming or Zombies in general I think you'll enjoy this movie. It isn't a genre I have explored much until now but it's certainly worth taking a look at. A sequel is in production and is slated for 2011 release.
I'll be waiting for the DVD release so I can watch it in daylight.
Posted by BigLee at 09:01