No sooner have I finished one project - the Flak 36 Platoon for my Panzer Lehr Army - than I'm into the next one with Gusto. I've spent a lot of time this weekend preparing, cleaning and assembling the US Motorised Rifle Platoon which I bought so cheaply a few weeks ago on eBay. I'm determined to get both forces ready for battle by the end of the year.

I thought I'd share a few pictures of my weekends work (to prove I'm not making it all up). 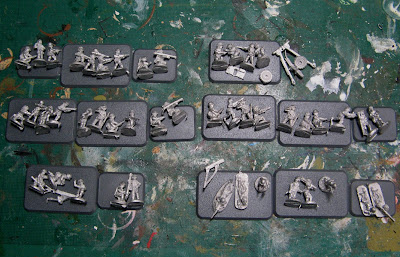 First I got all the infantry figures out and had a good look at them. I did a little clean-up work on some but mostly left this until I started putting them on their bases. For the moment I just wanted to figure out what each model was and put together the various squads and teams that make up this platoon.

This actually took a lot longer than I thought because the information and pictures on the box are a bit sparse. In the end I fired up my computer and went on the FOW website and looked at the pictures there before assembling my squads. In particular the M3 37mm Gun was a bit of a mystery until I looked at a finished squad pictured on the website. 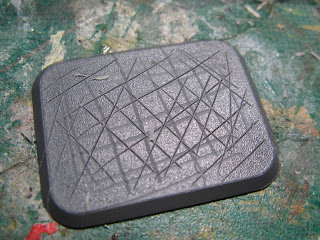 Next I prepared all the bases by scoring the surface with a modelling knife. This will help the filler I use for the bases adhere properly. I also washed them in soapy water to remove any grease and dirt. I then thoroughly dried them before starting to stick anything on. Patience is key to every stage when working with miniatures (even at this early stage) but its often a lesson everyone has to learn for themselves!

Once the bases were prepared I glued the infantry into position. Some modellers prefer to paint infantry separately and base them when finished. I had to do this for the infantry on my FlaK 36 bases because there would have been too little space to paint them properly. The downside (as I discovered) is that its easy to ruin the paint job when you try and base them after painting. In this case there is plenty of room on the base to get access to all the fiddly bits when painting. 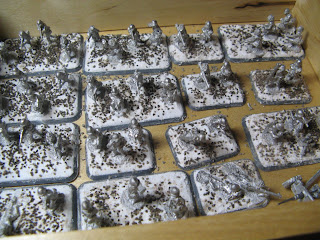 Once stuck to the base I then fill in the gaps with a ready mixed wall filler. The cheap brand I use is smooth grained and dries in 20-30 minutes. I sprinkled a handful of ballast on the still tacky putty to add a grainy texture. Although this stuff dries quickly I will leave this overnight to make sure its fully set all the way through... again patience is key!

One thing you should not do is put your Mortars the wrong way round! Fortunately I spotted this now and was able to remove the self defeating weaponry and reposition it correctly. I also assembled the five M3 Halftracks that came with this platoon but it was the infantry that took most of the time and effort.

So there you have it, this is what I did at the weekend. I need to leave these for 24hrs to dry fully and then I can undercoat.
Posted by BigLee at 09:01