Once more, A Bridge Too Far 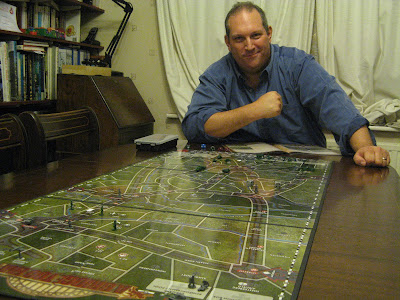 ﻿I finally played my board game A Bridge Too Far with my Brother-in-Law at the weekend. It took a while to get into the game because of the initial complexity of the rules (I'd read them but Ray hadn't) but once we'd run through one turn the game picked up and sped along smoothly to the conclusion. I'm sure we got a few things wrong (air Interdiction missions for instance) but we are both determined to play again soon and I'm sure we will iron out any errors next time.

I decided to play the allied side while Ray coordinated the German counterattacks in an attempt to stop my offensive and cut my supply lines. I definitely think the Allied player has more work to do in this game and I seemed to spend most of the game fighting and winning battles continually. During the first turn of the game the Allied player has a +1 to the initiative rolls for for each of the random number of battles to be fought. Despite this advantage I constantly lost the initiative to the Germans (I can honestly say I have never rolled so many 1's in any game in my life). It was uncanny, and not at all funny. Having said that I definitely had the upper hand for the first couple of turns as I pushed up the board and extended my offensive. 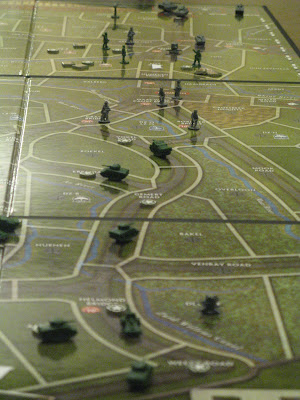 ﻿﻿﻿﻿﻿﻿﻿I decided early on the game to concentrate on a single powerful thrust up the right hand side of the board with the intention of focusing on taking the Nijmegan Bridge. It seemed clear to me that this bridge was vital to the success of my allied thrust. Unfortunately Ray also understood the value of this route and focused his counterattacks on this spot. The result was a series of battles that saw this vital Bridge change hands several times, ending with the Germans retaining control of both the bridge and the town.

By the end of the game I had failed to secure the Nijmegan Bridge and link up with my Paratroopers at Arnhem. Between them the town of Nijmegan and the Bridge zone were worth 110 points and failing to secure them meant that Ray retained these points and we ended the game with a decisive win for the Germans.

The game lasted about two and a half hours but probably an hour of that was taken with reading and interpreting the rules. Subsequent turns went much quicker and the next time we play I expect we could easily finish in the 90 minutes the rules suggest. The Allied player certainly has his work cut out and despite the superior number of Firestorm troops at his disposal - and the bonus to initiative in the first turn - victory is most definitely not a foregone conclusion. Considering the outcome of this first game I have to say I thought it played very well and emphasised the ambitious nature of the Market Garden offensive.﻿﻿﻿﻿﻿﻿﻿﻿﻿﻿﻿﻿﻿﻿﻿﻿
Posted by BigLee at 09:01