Siegfried Sassoon, the WWI Poet, has been in the news today. The campaign to save the papers of Sassoon for the nation has been given a grant of £550,000 by the The National Heritage Memorial. I've read Sassoon's Soldiers Declaration before but tonight I heard it read aloud on Radio 4 as I was driving home. Hearing it aloud was actually quite moving, especially given that we still have soldiers of our own overseas at this time. Here are the words in full: 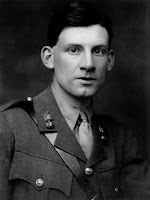 "I am making this statement as an act of willful defiance of military authority, because I believe that the war is being deliberately prolonged by those who have the power to end it.

I am a soldier, convinced that I am acting on behalf of soldiers. I believe that this war, upon which I entered as a war of defense and liberation, has now become a war of aggression and conquest. I believe that the purposes for which I and my fellow-soldiers entered upon this war should have been so clearly stated as to have made it impossible to change them, and that, had this been done, the objects which actuated us would now be attainable by negotiation.

I have seen and endured the sufferings of the troops, and I can no longer be a party to prolong these sufferings for ends which I believe to be evil and unjust.

I am not protesting against the conduct of the war, but against the political errors and insincerities for which the fighting men are being sacrificed.

On behalf of those who are suffering now I make this protest against the deception which is being practiced on them; also I believe that I may help to destroy the callous complacence with which the majority of those at home regard the continuance of agonies which they do not share, and which they have not sufficient imagination to realize."