I've been on the lookout for some suitable Propaganda Posters that I can shrink down and use as detail on some 15mm buildings for wargaming with. In the process I have found that I'm rather partial to a bit of Propaganda. Especially when its done with humor. I found the following poster while idly browsing the Web and it has to be one of my favorite examples of the art from WWII. 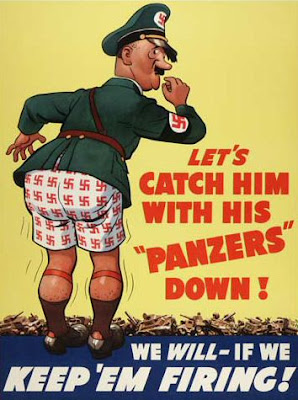 The use of humor to convey what is in fact a very serious message is masterful in this poster. The image of Hitler in his Swastika boxer shorts both reduces him to the level of the man in the street (as opposed to some semi mythical monster) then humiliates him. The result is a very funny cartoon that conveys its message and bolsters moral in the same tidy package. The same can be said of this poster to promote the use of condoms. 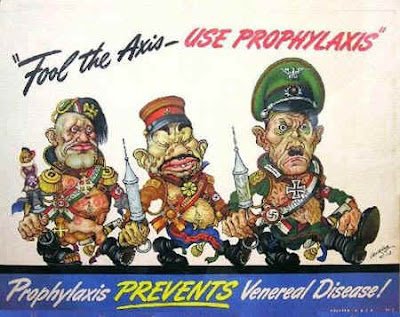 Both posters are a world away from the stirring and patriotic images employed by Germany and the USSR during the war. But the use of black humor to convey a serious message seems to me to be a quintessentially British thing to do.
Posted by BigLee at 12:26