Well that's it for the year, my last convention of 2009. Here are a selection of pictures from the event. First off a view of the main hall from the balcony. It was quite busy this year even though I arrived late (thank you, TFL engineering works). The number of traders seemed about the same as last year but I noticed much more variety in the range of traders present. 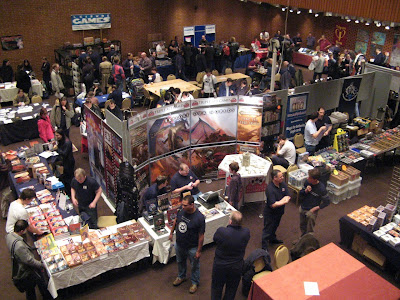 The foyer was also busy with lots of boardgames and card based games on display. I took several pictures of the Participation games including this Battlestar Galactica game. 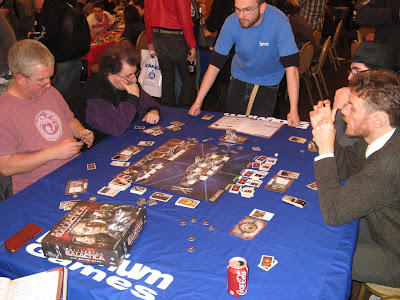 There seemed to be a lot of boardgames at this years show including this intriguing looking game, Kamisado. 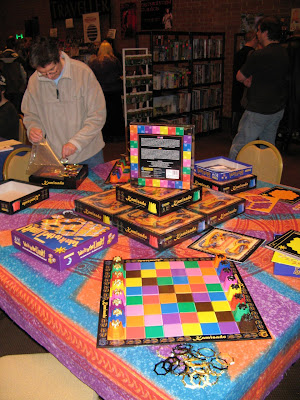 There was also a preview copy of the new 3rd edition of Warhammer Fantasy Roleplay on display. The box looked packed full of items and the artwork was rich and inspiring... but at a RRP of £80 a little rich for my wallet. 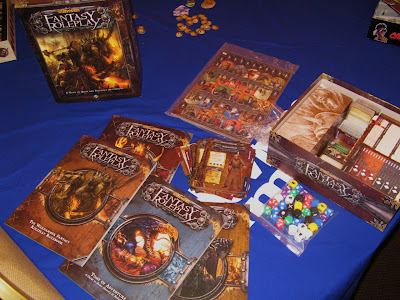 Also present were various LARPers which added a colourful feel to this varied event. These two were handing out cards for the Phoenix Games Club which ran several RPG participation games during the day. 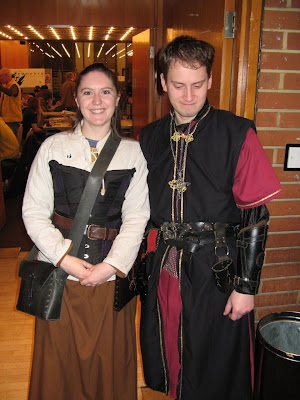 I enjoyed this years event more than previous years, mostly because of the variety of games being demonstrated. I didn't spend much this year but spent more time talking to traders and getting a feel for the state of the industry. The Credit Crunch certainly doesn't seem to have dampened creativity with lost of new products launched this year or planned for next year. In fact this very subject was discussed by Carol Mulholland editor of Flagship in her last editorial. Carol was at Dragonmeet and I picked up a couple of back issues of this excellent independent gaming magazine from her stand.

All my photo's from this years event (33 in total) can be viewed on my Picasa page as usual by following this link.