Today is the 5th of November and if you are a Brit you already know the significance of that date. But for the benefit of my overseas readers here's why tonight we will be celebrating the prevention of a plot to blow up Parliament and the King (who would have been present at the time as part of the State opening of Parliament) over 400 years after the event. 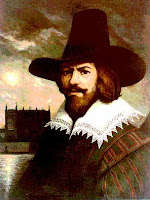 So why are we still celebrating the failure of this plot when it is now firmly in our past? Maybe its the symbolism of this attack on democracy itself that is so significant. But it might also be that until 1859 it was actually LAW (Royal Decree) that we celebrate the event. Ironically in 2002 Fawkes was ranked 30th on a list of the 100 Greatest Britons, voted on by the general public. Indeed Fawkes has been described as "The only man to enter Parliament with honest intentions". However it should be noted that he intended to do this with 1,800 pounds (or 36 barrels) of gunpowder.

In 2004 a BBC documentary created a mock up of the explosion which revealed its full and deadly potential. I guarantee you will be amazed at the power of Gunpowder.

There are plenty of What If? scenarios but check out the BBC History site and the Gunpowder Plot Society website for further reading.