Having just finished a rather heavy history book (Band of Brigands) I found myself hunting around for something a little lighter to read for a few days. What I found was a handful of well thumbed and much loved Fighting Fantasy books by Steve Jackson and Ian Livingstone. These aren't actually my original copies (They bit the dust decades ago) but copies I picked up in the mid 90's in a moment of nostalgia. 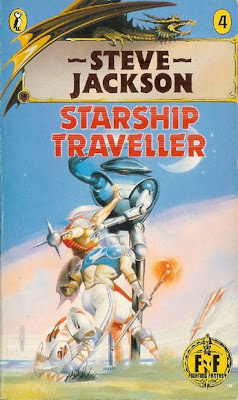 Starship Traveler (first published in 1983) was the first one I ever read/played so it holds a special place in my memory. I can't remember which one of my friends gave me my original copy but little could they know I'd still enjoy the book nearly 30 years later!

Another favorite was The Citadel of Chaos published in 1983. I was drawn into the book with description on the back... "Deep inside the Citadel of Chaos, the dread sorcerer Balthus Dire is plotting the downfall of the goodfolk of the Vale of Willow. His battle plans are laid, his awesome army equipped, and attack is surely imminent.Summoned by a desperate plea for help, YOU are the Vale of Willow’s only hope. As star pupil of the Grand Wizard of Yore and a master sorcerer yourself, you must strike at the very heart of Balthus Dire’s nightmare world. Though you command many powerful spells, the quest may be deadly, for who knows what creatures lie in wait in the Citadel of Chaos?" Who could resist such a call to action!

There were dozens of these books and many have been reprinted several times. Initially the books were fairly simplistic but they grew in ambition and complexity as the series developed. Another favorite was City of Thieves which was the first one I read that was set in an urban location. "Terror stalks the night as Zanbar Bone and his bloodthirsty Moon Dogs hold the prosperous town of Silverton to ransom. YOU are an adventurer, and the merchants of Silverton turn to you in their hour of need.Your mission takes you along dark, twisting streets where thieves, vagabonds and creatures of the night lie in wait to trap the unwary traveller. And beyond lies the most fearsome adventure of them all – the tower stronghold of the infamous Zanbar Bone!"

If you have an old copy of these lurking in a cupboard or bookshelf somewhere go dig them out. I think you'll still find them as fun and engaging now as when they were first published. And maybe you can get the next generation of gamers started on these books. It worked for me.
Posted by BigLee at 11:01