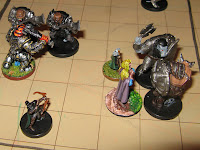 My gaming group, the Dagenham Dungeon Delvers, met again last night and this time we resumed our D&D campaign. All our characters are perilously close to leveling up but our GM is notoriously tight with the XP.

We played at a different venue this time, at the GM's house in Rayleigh as opposed to my place in Dagenham. This isn't a problem but it does highlight the wide scattering of our players across London. It's something of a logistical nightmare trying to organise anything out of the ordinary for our group. Last Nights game for instance necessitated several rounds of texts and emails plus some last minute phone calls and three pickup points!

I'm not complaining (OK I am, but not in a negative way) because I think we have a good balance group and everyone gets on very well. 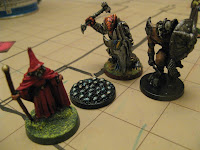 Our player characters have now entered the Temple of Orcus in a bid to defeat the Dark Elf and her Orc minions and rescue her halfling slaves. Our 'plan' (if you can call it that) is to destroy as many Orcs as possible before the alarm is raised and then to press on to the final kill. Our progression through the upper chambers of the Temple has been opposed but not in any organised way. Unfortunately the Shadowfell is close in this location and death brings it's own hazards.

Whenever we killed an Orc (and we were getting through them at a fair rate) the GM rolled a % dice... and when he rolled 10% or less the corpse was consumed by a Rot Scarab Swarm which then went on to attack our PC's. While the Orcs were easy to defeat the Rot Scarab Swarms were not. The end result was a tough and long winded fight as we splatted clumps of the swarm with hammers, shields and booted feet.

All in all a very fun evening as we went on a killing spree. And we leveled up to 5th so we all went home with a smile on our faces.
Posted by BigLee at 09:01