Some time ago I wrote a riot scene for my D&D campaign and thought it might be worth sharing some of the ideas I gathered together. Once the Riot is under way, and especially if it is city wide the PCs may encounter several vignettes that 'paint a picture' of the developing chaos. 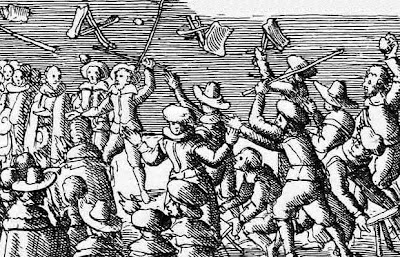 Calm before the Storm - At first the PC’s may only be aware of individuals or small groups moving with purpose and carrying forks, old weapons or just cudgels and lumps of wood. Smoke might be seen rising from the area of the riot, and watchmen will be seen running towards the area. Word will quickly spread in the street of what is happening. Watchmen will be positioned at major street intersections and will be prominently armed and carrying shields. Expect Watchmen to be seen arresting people or at least intervening in events.

Pointless Plunder - A Young boy runs into one of the PC’s. He is carrying a large Jar. He doesn't know what’s in it, he just grabbed it. “Everyone’s helping themselves… its fantastic! …everyone else was taking stuff. I wasn’t the only one mister… If you hurry you might get some stuff for yourself…” There will be plenty of similar examples in the surrounding streets. A man struggling to carry a statue, almost as tall as himself. A Dwarf carrying a basket of cabbages. Two Halflings with armfuls of cloths (mostly human size). The aim of this scene is to underline the pointless nature of the looting taking place and to emphasis the opportunistic nature of much of it.

Assault - A gang of thugs armed with knives are chasing a merchant who staggers towards you, blood streaming from a cut to the head. “Please help me…their trying to rob me…”. The mob take a second to appraise you and then make the worst decision of their lives. They accost the PCs and demand money and/or valuables. If the PCs surrender their wealth, the assailants flee, yelling insults over their shoulders. Any attempt to resist the assault leads to armed conflict.

Frightened Watchmen - The stress of coping with the violence of the rioting severely tests the morale of the various law enforcement officials. Many watchmen are unequal to the stress, and incidents of brutality occur. Agitators, looters, and other criminals are the most likely victims, but any citizen resisting enforcement efforts (by prowling the city armed, for example) may fall victim to the enraged enforcers.

An overturned cart - The cart is on its side and has left trampled fruit all over the street. The cart’s wheels are intact but the harness for its horse is broken. This scene might be a chance for the PCs to help someone trapped or help the owner right his cart. Acts of generosity are an opportunity to gather information from the people helped.

The Rabble-rouser - The PCs encounter a man standing on the back of a cart speaking to an ever growing crowd. He is trying to whip up the passions and anger of the crowd. Many people seem to agree with him.

Fire & Smoke - If the riot is not quickly controlled then the violence could spread from disorder and looting through to property destruction. Fires may start to be set and the streets will fill up with smoke and burning embers. Once fire has taken hold then anyone in the streets where the fire are is at risk from building masonry and falling debris.

Unwilling participants - While some citizens throw bricks and flaming torches others form bucket chains to put out fires. Watchmen forcefully break up some rioters…blood may be shed. Examples of watch brutality may well increase even though many lawful citizens may be outside fleeing for their lives or helping out out fires. Confusion and panic are the order of the day, on both sides.

Stampede - The PCs are caught up in a crowd of hundreds of individuals fleeing some other riot encounter (they may never know which event or the GM may roll again to determine the event and describe it for the players). Characters may find it hard or even impossible to move except in the direction of the flow. There will be a real danger of being trampled or crushed as crowds surge through the streets.

If the PCs decide to stay indoors out of trouble - Bring the trouble to them. Have the riot spill over into their area. Outside the sounds of unrest grow louder and louder. The sound of shouting and of stuff being smashed becomes more audible….then a stone vase comes crashing through the window.

I've tried to keep these encounters 'rule free' so they can be adapted to any system. Many of the scenes described have come from real life accounts of riots and public unrest. Taken together they can be used to present a scene of chaos and fear. The GM must be ready to adapt and go with the flow of the game and the players must expect to have very little control of events around them. For this reason running a riot in a city based game can be both exciting and terrifying for GM & players alike and is sure to be a memorable event.