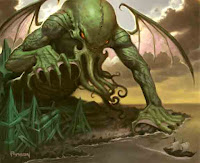 I've had an awful nights sleep. In fact I had one of the most bizarre nights of my life with lovecraftian mythos inspired nightmares filling my mind for most of the night. My dreams consisted of mist shrouded coastlines, lonely clifftop paths, dark moonless nights, deserted lighthouses, decaying wharfs and warehouses and the vague outline of some massive cyclopean creature just out of view through foggy seas. I woke several times shaken and confused only to drift back off to sleep and return to this decaying New England dreamworld.

Dreams fascinated H.P.Lovecraft, indeed he often claimed that his writing was inspired by nocturnal visions he had had. Several stories featured strange and vaguely horrifying nightmares like mine. Usually as the dreamer slowly descended into madness! Eek!!