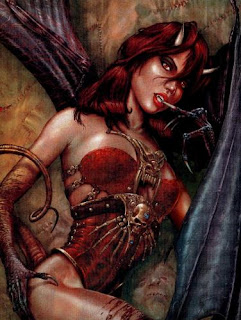 Before you get all excited, this isn't about Ladies of Ill Repute (well not entirely) but rather about those intangible and often 'off screen' relationships that RPG characters develop in the game world. Often its a subject that just doesn't come up because its not relevant to the adventure in hand or the needs of the quest. Relationships are important to real people so why not also to our Characters?

Some GM's treat the whole subject of 'relationships' beyond the adventuring party as taboo. Indeed at low level it seems more important just to survive and level up. But eventually your PC's wealth and standing in the world in which you play will mean they have to put down roots. This might mean renting permanent lodging in a tavern but it could also mean a base of operations like a small keep, or even a house. Once they have established themselves in a community they would logically need to become part of that community in order to acquire new work and stay on the good side of the Law. And nothing cements a union like that than marriage.

As with GM's many players have no interest in developing the back story of a PC to include a wife and two kids (how many of your PC's have been 'Orphans'?). But some do want to make internally consistent stories that link their character to the world in which they live. Giving a PC a home and familial commitments also gives them a reason for their adventuring life, as convincing as any life quest or search for redemption. A married PC needs to adventure and bring home the gold to put food on the table!

OK I accept that this is all a little mundane for a world that (in D&D at least) is meant to be fantastical, but it does give your PC a much more rounded and realistic feel. Unfortunately it also gives the GM a world of opportunities to disrupt that quiet existence. Once you have a home, a family, friends etc you also provide the GM with multiple potential adventure hooks. Kidnap, robbery or even murder can take an adventure into an entirely unexpected direction and make the adventure seem much more than some abstract quest dished out in the local Tavern.

As well as relationships there are also sound reasons for introducing sex to the game that go beyond mere titillation. Brothels and those that work in them can potentially be a huge font of local knowledge and intrigue. If wooing the lady friend of the local evil genius is OK for Mr Bond then why not your own character? In my last campaign for instance I introduced a brothel where the real business was the acquisition of secrets and its subsequent sale or suppression. Intrigue and tension thereby took the place of combat and action.

So next time you're players start to 'put down roots' don't panic. Just remember that adventure is where you find it!