I'm Indoctrinating teaching my children to be gamers like their old man. My eldest, Sarah, is already running her own D&D campaign. She recently had a surreal experience in school and I asked her to write about it for this blog.

"You may think that its only the older generation that ever plays d&d, maybe once or twice a fortnight round a friends house with a couple of crates of beer [How much beer does she think we drink?!]. However I know from experience that that's not the case, and I've often convinced my cousins to play - after much nagging - a simplified version of the game. 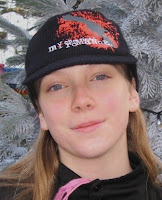 In fact, the other day I had a rather bizarre experience in school which made both my dad and I laugh. My lunch table had some new editions to it at the far end, when I joined my friends at lunch. We were getting on well with them when one of them pulled out a box of pre-painted models. I lost the thread of conversation then, but soon not only models but character sheets, rulebooks and dice were being put on the table and to my utter astonishment a D&D game [4E] began to be played right there, in school, in the middle of break.

A couple of them looked a little embarrassed when they caught me looking, and began to explain, but I told them I knew what they were doing (to their relief) and I politely declined when I was invited to join in (not that I wasn't tempted). Okay, I realise that this could be a one off, and its likely that there aren't many kids who play D&D in our school, but I like to think that this is a good sign that there is hope for us after all."

There are a couple of things about this incident that gave me pause for thought. First, these are 12-13 year old's, yet they have already begun to develop a sense of embarrassment about their hobby. But on the plus side they did start their game in a public space which means they may yet be developing that thick skin we often seem to need. I'm quietly optimistic for this budding gaming group.
The second thing I noted, this time with much more satisfaction, was the fact that Sarah referred to 'us', including herself in the collective gaming community. She clearly already thinks of herself as a gamer. My Padawan Learner has come of age. My work here is done.
Posted by BigLee at 09:01