Last weekend I went to the Royal Engineers Museum and posted a short review here on this blog. One of the more interesting exhibits inside the museum focused on the birth of the Engineers Corps Diving section.

This 'specialist' section was introduced in 1838 by Colonel (later General Sir) Charles Pasley. In the early days both Royal Engineers and Royal Sappers and Miners trained as deep water divers. In 1839 Sappers carried out the underwater explosive clearance of the wrecks of the William and Royal George at Portsmouth. 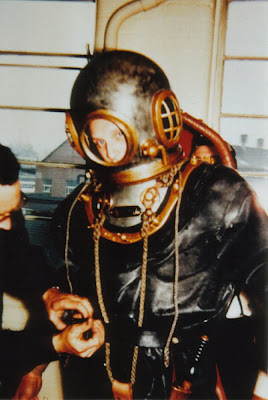 They used a combination of Diving Bells and Hard Helmet diving suits to complete their task. I was interested to learn that during this clearance the divers came across another wreck which may have been the Mary Rose. Hard Helmet suits remained in use (with various improvments and upgrades) right into the 20th century. The picture above was taken in 1962 and the man in the suit is my Dad.
Posted by BigLee at 10:25