I don't play many computer games these days, I just don't have the time to devote to them in between all my other hobbies. But now and again I am tempted play some digital warfare. One game that looks cool is Order of War.

"In the summer of 1944, the Second World War entered its end-game when the Allies launched two major operations that would drive back German forces on both the Western and Eastern Fronts at once. In the ultimate test of military strategy, ORDER OF WAR will challenge you not only to lead America’s finest to victory in the West, but also place you in command of German forces charged with repelling the Red Army’s seemingly unstoppable offensive in the East.Even the keenest military minds will find that it’s one thing to make history, but quite another to change it. Do you have what it takes to command?"
(Source: gamershell.com)

The screenshots look stunning although I was struck by the very cinematic feel of the images. 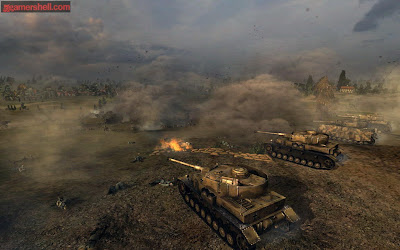 I saw this short video for the game and thought it worth posting. The vid is embeded so just click the play button and it should work... hopefully.
Order of War is due for release on September 18th.
Posted by BigLee at 08:01