350 years ago today was a very bad day... if your name was Robinson Crusoe. The book of the same name was written by Daniel Defoe and was first published in 1719. The book is the fictional story of a Castaway who spends the next 28 years on a small island near Venezuela before rescue. The story, although a work of fiction, is often attributed as being influenced by the true story of the Scotsman Alexander Selkirk who was himself marooned on a pacific island for four years. 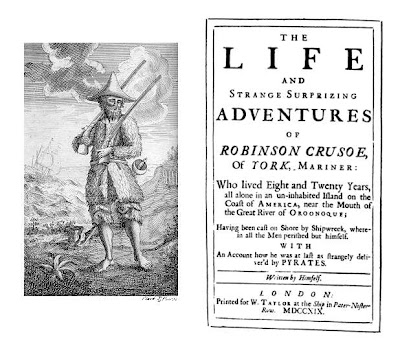 I love this book and would certainly place it on my list of most influential books along with Treasure Island and 20000 Leagues under the Sea. These three books combined to spark my imagination for adventure and most certainly laid the groundwork for my later adoption of D&D as a hobby.

The thing I liked about the story of Crusoe was the fact that this terrible disaster of being marooned on a desert island was actually the making of the man. His life which had until then been aimless and material was transformed. So maybe this wasn't such a terrible day after all.
Posted by BigLee at 09:01