WWII saw some amazing developments in military technology on both sides. The Germans in particular expended a lot of energy developing its 'Vengeance Weapons' and other outlandish or impractical weapons of war. One such design was the proposed Panzerkampfwagen VIII "Maus".

The Maus was a a prototype Super heavy Tank proposed and developed by Porshe to Adolf Hitler as early as 1942. It had reached the prototype development stage by the end of the war and only two had been completed by the time the Soviets overran the eastern half of Germany. 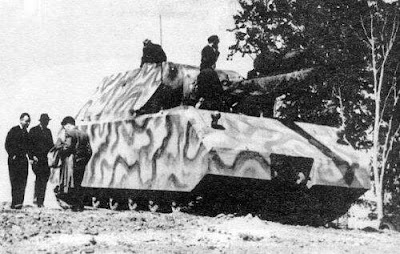 At 10.1 meters long, 3.67 metres wide, 3.66 metres tall and weighing in at about 180 tonnes this would have dwarfed any other tank every produced. The Maus would have carried a main armament of a 128 mm cannon with a coaxial 75 mm gun and steel armour ranging from 60-240 mm thick. But its top speed would have been no more than 20km/h and few if any bridges would have been able to take this behemoth. 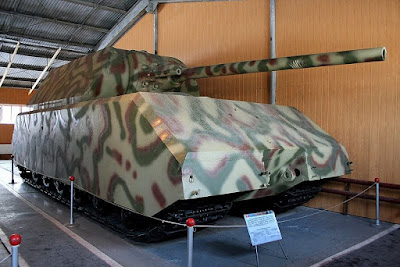 German madness did not stop with this vehicle though. In development (at least at the planning stages) was the P1000 "Ratte"which would have been a staggering 1000 tonnes and had crew of between 20-40.

I found this video on YouTube which collects together various pictures and design drawings for both these vehicles.
Posted by BigLee at 08:01