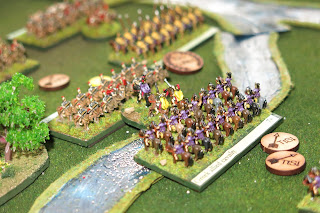 Today I decided I needed a game come what may so I decided to give a solo game a try. I've not done much of this in the past but I think this may be the way forward for me. I've missed a lot of games with the Rejects this year due to unfortunate timing and illness and while I'm determined to rectify this I think a few home games on my day off work wont do me any harm. So today I decided to have a small solo game of To the Strongest!

I made up two small cavalry only forces from my Greek/Epirots and Polybian Roman armies. The scenario is that both sides are sending out small cavalry forces to scout a crossing point along a river for the main army. Both forces approach each other unawares on opposite sides of the bank of the river. The game starts as both sides spot each other. There are several fords in this area and lots of woods and small hills. Not ideal country for a major battle but certainly suitable ground for two scouting forces to have a go at each other.


Analysis
Well that was fun. I honestly didn't know which way this was going for most of the battle but when the end came it happened in just a couple of turns.
Posted by BigLee at 16:01