Gaming my way to Happiness

One of the regular reasons wargamers often give for not indulging our hobbies is work, be that the type that earns money or the type that keep the house running. Many of us are busy trying to hold down a decent job - sometimes two! - just to make ends meet. And when we aren't making money for 'the Man' we have a list of household chores as long as your arm to deal with. Finding time to play with our toys can often be hard to justify. I'm sure most of us can cite many moments when the 'work/life balance' has tipped a little too far in favour of work and most of us can cope with that in the short term. But when this goes on without an end in sight it can be detrimental to our mental and physical health. I'm a firm believer in hobbies being an effective remedy for stress. 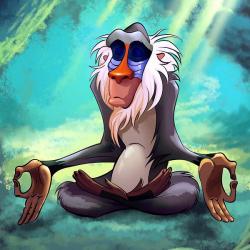 I was recently sent on a Mindfulness course by my company and when I stopped laughing at this 'bunch of hippy nonsense' it did make me think about how I use my hobby as a distraction from everyday life. Without getting all metaphysical on you I think that having a passion or even an obsession that isn't work related is one way to clear the mind. The so call mindfulness coach I spent a 'delightful' afternoon with, believed that meditation was the answer to dealing with stress. I'd argue that concentrating on skillful activity - especially something utterly removed from your regular job - is a form of meditation, and the benefits are just as measurable. Before you think I've 'lost it', let me explain myself.

Grab a dictionary (or Google) and it will give a definition of meditation that will probably read something like this; the act of focusing ones mind for a period of time, in silence or with the aid of chanting or music, for spiritual purposes or as a method of relaxation. Well that pretty much sounds like a typical painting session to me. I get 'in the zone' by blocking out distractions such as the TV by listening to music. Some people find the sound of talking soothing and enjoy listening to Pod casts while they paint. The effect is the same as meditation, its about cancelling out other distractions and bringing focus to the hear and now.

Now having expounded the benefits of gaming as a means of stress relief I have to say the last few months have been a bit spartan in terms of painting and gaming for me. The reasons have been many, varied and often hard to define. The summer holidays are always a hard time to fit games in as many of our group have busy summer schedules. I've also missed several games with The Rejects and the last two games have had to be cancelled at the last minute. In fact I was supposed to have a game today but this has had to be cancelled because our glorious leader, host and umpire Postie is feeling under the weather. It can't be helped but I was rather looking forward to a game today and I have been talked into going shopping with the wife instead (eek!).

I've lost count how many times I have written about a slump in hobby activity but I know that the next few months will see things turned around. Over the winter we have the Analogue Painting Challenge and I'm trying to prepare as bast I can for that. I have a lot of figures that need to be mounted and primed before the starting pistol fires so I will be cracking on with this process in the next few days. I also have a bit of holiday time scheduled so hopefully as well as painting I can get a couple of games in with the Young Padawan. I may even get a few Solo games in, something I haven't indulged in much before. It'll be interesting to see if I can outwit myself... everyone else does.
Posted by BigLee at 09:59