To the Strongest for the Anglo Zulu War 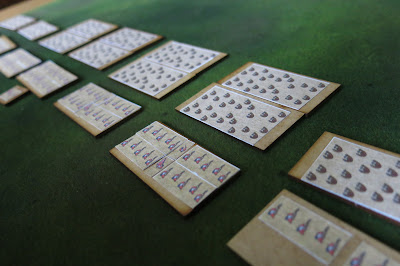 So the Zulu madness continues. For the last couple of months I have been tinkering with various ideas for a set of Zulu War rules. I started out conventionally enough by looking at lots of different rule sets that were already available. None felt right to me, especially for 6mm, and I reasoned that if I had to make significant adaptions to make a rule set fit 6mm wargaming then I may as well write my own (such an idiot!). Then a few weeks ago I read something on the To the Strongest forum pages that really piqued my interest. Someone else was working on a variant of the rules for colonial wargaming in the 19th Century.

Various conversations later, and an few photo's from Partizan that showed an early play-test of the rules in a demo game, and I am very very interested in this idea. TtS! is a very simple game to play but difficult to master. The basic mechanics of the game cut through a lot of the irritating complexities found in more 'realistic' games (ie they cause less arguments with Rules Lawyers!). The subtleties of the rules however make for interesting games and sometimes surprising outcomes, which is what I want from a game system. I can definitely see scope for the TtS! rules to be expanded into this period. 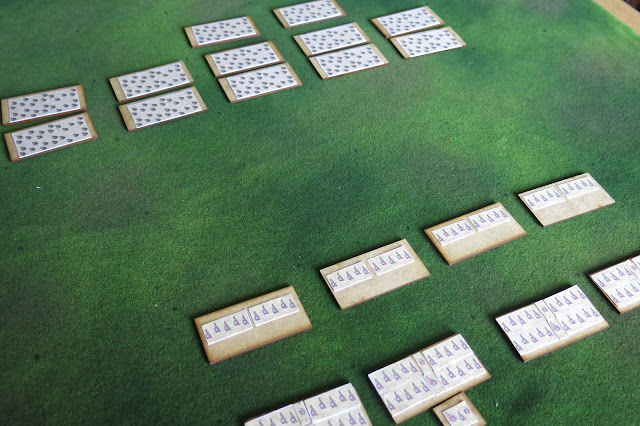 So have I written a set of TtS rules for the Zulu War? Err... no, not yet. I have lots of ideas (including several intriguing ones from that recent discussion on the TtS! Forum) but so far I haven't made any firm decisions other than to jot down some general ideas on paper. I have however had a go at deciding how to base my figures at long last. I used my paper troops that I printed a while back and put them on the bases I'm thinking of using. This is helping me to play around ideas before committing any cash to models and bases.

TtS! uses a grid system and the exact basing of troops does not need to conform to a particular design. This has freed me up to make some general basing decisions that suite my own aesthetic requirements for the game. I want big units and therefore a lower figure ratio is required but I also want to fit medium and large scale games on a reasonable sized table.


Imperial troops, indeed all 'Europeans' will be based on 30x60mm bases (Baccus Standard). Formed units will be represented as double lines, skirmish units as single lines with Guns etc on 30x30 square bases and commanders on 20x20 square bases. Initially I was considering putting the Zulus on the same 30x60 bases but as these will be Extra Deep units I will make them up on 60x60 bases. Multiple bases will make up Zulu Regiments. This basing option means I'll end up with a figure ratio of about 1:5 so I can play medium sized battles on a regular table or big actions on the Rejects super sized gaming table in the shed-o-war.


I'll be tinkering with some the rules adaptions in coming weeks but I'm in no rush...especially as I know others are doing the same. If I prevaricate long enough someone else will eventually publish a supplement to the Standard rules and in the meantime I have a LOT of miniatures to paint.
Posted by BigLee at 07:33