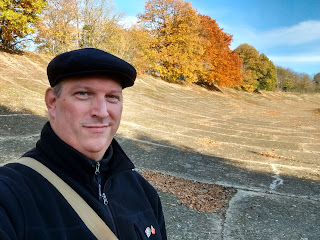 Yesterday I went to the Brooklands Motor Museum in Surrey for their Military Vehicle event. Its probably the last such event of the year for me and one that I haven't been to before so I was looking forward to it. I have been to Brooklands before though, a few years ago I was here for a corporate day with my old firm. When I and my boss finished the event we spent a couple of hours exploring the site before heading home, our 'official' reason for being there completely forgotten! This time I was able to take my time looking around the site and unlike my last visit I came equipped with a decent camera.

Brooklands was the world's first purpose-built motor racing circuit. Local landowner Hugh Locke King wanted a race track but it was the design genius of Colonel H.C.L. Holden that saw it develop into the 3¼ mile concrete banked circuit that became synonymous with British motor racing. Work commenced in late 1906 and was completed in just nine months with the first race in July 1907. Very soon afterwards the site also began its long association with aircraft design and testing. BAC, Bleriot, British Aerospace, Hawker, Sopwith and Vickers have all tested here and it is estimated that over 18,600 new aircraft of nearly 250 types were first flown, manufactured or assembled at Brooklands. (Source: www.brooklandsmuseum.com).

The museum boasts a wide range of exhibits, from its Aircraft Hanger; Workshops; Motoring Sheds including an exhibition of British Grand-Prix racing vehicles; a selection of aircraft including Concord outside; and of course the remaining sections of race track and banking which have recently been restored. The Military Vehicle rally was just the sort of excuse I needed to revisit this excellent museum and explore it properly.

Despite the cold weather it remained sunny all day ensuring a good day was had by all.