Something has got to go

Its finally happened, the space has run out. I'm probably not as bad a hoarder as most wargamers having spent many years just playing RPG's and therefore not collecting much in the way of scenery or models. But about 6 years ago I started writing my own D&D campaign setting with the clear intention of running my own game. That's when the collecting started in earnest.

When I decided to give this GM lark a whirl for myself I decided I would do things a little differently. Firstly I wanted it to be miniatures based with an emphasis on visual impact as much as story. I have always enjoyed seeing wargame tables at conventions and wanted to recreate some of that visual impact in my D&D campaign. So from the start I used every resource at my disposal including purpose bought miniatures, printed floor plans, 3d scenery and even buildings. These were the sort of items more accustomed to being seen on the wargames table, not in a RPG game. I also collected and used lots of other props from maps, parchments, fake jewellery, bags of coins and even a load of fish heads! 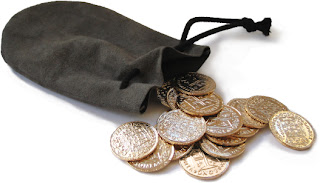 The only problem with all this collecting is much of what I bought has only seen the light of day once or twice and then been boxed up and stored. Now I'm repeating the process this time with 15mm wargame figures and lots and lots of terrain. The space is definitely running out, as is my wife patience (I can't blame her really).

So I have decided to have a clear out and maybe make some money in the process. I have my eye firmly set on attending SELWG in October and hopefully I'll come loaded down with plenty of loot to sell on the Bring and Buy stall. Its going to be a wrench to sell some items but I have to be honest with myself, much of this stuff will likely never be played with again. Better to pass it on to a new home, give another gamer a bargain they will remember and use the money I raise to buy yet more stuff to fill the house with!

I've never sold anything on a Bring and Buy before so this is new territory for me. Which leads me to the point of this post. Can BLMA readers offer me any advice or tips on how to proceed? I'm not looking to make a huge profit, I just want to make enough money to sweeten the pill of having to sell some stuff.
Posted by BigLee at 09:01