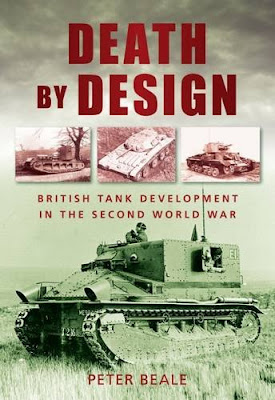 I recently finished reading an excellent book on British tank development between the wars and during WWII. Death By Design is written by Peter Beale - a former Troop Leader with the 9th Battalion RTR from 1943 to 1945 - in a frank and to-the-point style that often leaves the reader in no doubt how angry his subject matter has made him.

In the opening pages Beale makes it clear how he feels when he says "Tank crews were murdered because they were sent into battle so ill prepared.". The central thesis of this book is that tank crew lives were wasted because of incomplete training, uncertain doctrine (on how best to use tanks), poor leadership and sub-standard tank design.

Britain, the inventor of the Tank in WWI should have been ideally placed to lead the world in tank design and doctrine by 1939 but the inter-war years had seen army funding cut significantly and the role of 'offensive' land forces played second fiddle to the development and funding of the Navy and Air Force. The charge laid against the Government and military planners of those years is that they failed to plan for the eventuality of another war in Europe. Even when the harbingers of war began to press on the national consciousness the increase in funding and urgency failed to take into account the potential consequences of defeat. By the time the war started Britain's armed forces were woefully inadequate to the task before them.

This book covers all the reasons for this appalling situation, from the political backdrop of the inter-war years to the failure of planners to consolidate thinking on the correct role of the tank. This latter point is most starkly explored in the chapter on tank design which shows the wide and conflicting range of designs developed.

"..in the period 1930-35 work was done on fifty seven different designs of tank. Of these...twenty eight were never produced in a suitable form to issue to field units....Of those delivered to field units to be used in actions, 75 per sent were useless at the time they were delivered."

There is a lot of interesting information in this book. The personal opinions of the author are given full reign but I don't consider this to be a negative thing. On the contrary Beale's writing fully conveys the anger and frustration of many tank crews during the second world war, who often felt they were expendable assets rather than valued and highly trained soldiers. Ultimately weight of numbers and mechanical reliability were the key to defeating the technically superior tanks of the German Army. But I think Beale is very eloquent when he makes his case that many lives (both British and American) were expended unnecessarily.

One of the things that also made this book stand out to me was the political, pre-war story of budget cuts and  lack of development in Tank technology. In many respects it felt like a warning to current governments about the dangers of underinvestment in times of global military uncertainty. Given the pace of current world events - unpredicted and wholly unforeseen only six months ago - this book might be considered a warning from history. It's certainly an interesting read and one that is guaranteed to stir strong emotions in the reader.