This tutorial is my version of how to make Smoke and Flame Markers for use in Flames of War and other tabletop wargames. Battlefront sell a pack of coloured acrylic 'wool' as Smoke and Flame (product XX601) but it was the spectacular Smoke and Flame markers that have often graced the pages of Wargames Illustrated that I wanted to recreate.

I can't take credit for all of the techniques described below as much of this tutorial is a combination of ideas gathered from several sources, in particular this YouTube Video by the Terrain Guy on RHQ-TV (the tutorial starts at 3:40 into the video). However I have tried to experiment with different materials and techniques as much as possible to come up with what I think is the simplest and quickest method for making Smoke and Flame markers. 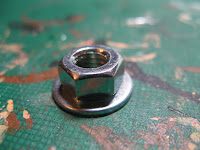 Stage One : A Heavy Base - The finished smoke columns are very light and easily knocked over. To prevent this I wanted a heavy base, preferably with a wide 'footprint' for stability. Some online tutorials suggest using coins as a base but as this is illegal in many countries I won't be recommending this method. Instead I bought a pack of nuts and 1" bolts with corresponding metal washers. Initially I used the bolt as a heavy core for my smoke markers but this resulted in rather fat looking smoke columns. In the end I found that super gluing a single Nut onto a larger washer (about the size of a penny) formed a perfectly stable and weighty base on which to build the model. 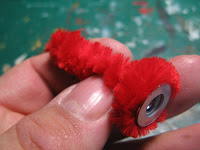 Stage Two : Making an Armature - I've read six or seven tutorials on how to make smoke and flame markers and they all recommend different materials from which to construct an armature on which to build the smoke column. Some advise using thin wire, others thick wire. The versions in WI281 used bamboo skewers and other sites suggested pipe cleaners. All have their merits and in the course of experimenting with this build I tried them all. Wire armatures work fine if you want thinner columns of smoke but it can be quite hard to fix the clump foliage to such a small core. The skewers worked best but frankly the idea of putting little sharpened stakes on my games table (ready for me to accidentally lean on them) didn't seem all that safe. The best option - and the one used here - were pipe cleaners. The furry surface gives plenty of surface for the clump foliage to 'key' onto and the wire core means these can be shaped pretty much as desired. 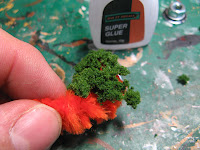 Stage Three : Adding Clump Foliage - I used cheep pound store superglue throughout this project, mainly because I needed so much of it. The main advantage of superglue is of course that it sets fast and it sets reasonably hard. The downside is that no matter how careful you are it will get on your fingers. Top Tip; don't start this project until you have a ready supply of Acetone or Acetone based nail varnish remover on standby! Take the pipe cleaner armature and - working one small section at a time - add a small amount of glue and then press on small clumps of the foliage material. Work your way around and up the armature until the whole thing is covered. Then go back and fill in any small gaps. Its worth giving the model a squeeze to compact the foliage and make sure its stuck firmly all round the armature. 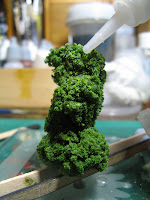 Stage Four : Superglue, lots of it - Warning! What I'm about to suggest is probably extremely hazardous and ill advised, but bare with me. Put the clump foliage covered model on a couple of sticks (cocktail sticks are fine) laid over an old dish of some kind to catch drips. Then soak the whole model in cheep superglue! The glue will set hard in a few minutes and results in a tough and durable model. However... the glue sets with an exothermic reaction (it produces heat) and gives off noxious fumes. Needless to say this stage is best done in a very well ventilated area! Some tutorials I have read suggest soaking the model in watered down PVA but I found this didn't produce as hard a finish as I wanted. Also the soaked model takes ages to dry out whereas my method means you're ready to start painting in a few minutes... assuming of course you haven't passed out from the fumes!


Stage Five : Painting - There are actually three simple steps to this process and you'll be amazed how fast this is to complete. First spray the whole model with red primer making sure to cover all the green foliage material. Give this ten minutes to dry then spray from above with black primer. This tops the fire with black oily smoke and adds definition to the billowing column. You may need to add a little more red to the bottom of the columns but I found that with short bursts of spray paint from between 10-15cm from the model a good look can be achieved easily. Leave this to dry thoroughly and then just drybrush the bottom third with bright yellow. Another method you could use is to paint red, add solid yellow to the lower portion of the model then dust with black so that the yellow and read are 'inside' the black smoke.

Stage Six : Varnish - The model is essentially finished at this point and you could stop here. However I wanted to make them even more durable so I sprayed the whole model in GW Purity Seal (a satin varnish) and then with Testors Dullcote to return the matt finish to the model.
And that's it. This method is fast and easy and I was able to make a dozen smoke and flame markers in just a couple of hours. Looking at my pictures I think I need to add a little more black to the tops of the models but on the whole I'm very happy with the completed markers. And here's what they look like in action. 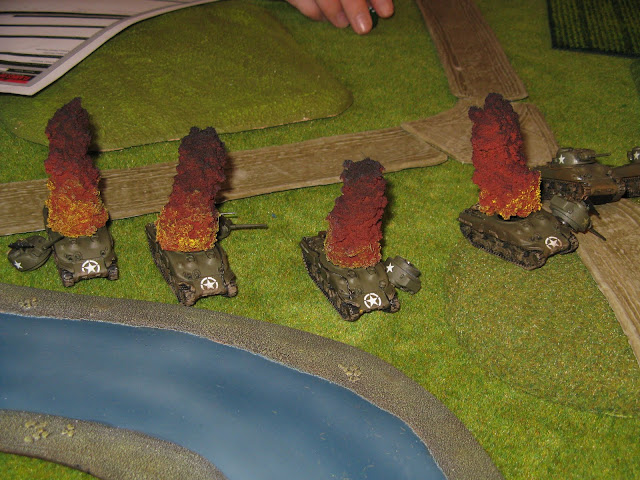 As stated earlier I'm not taking credit for coming up with all the ideas described here, as much of the above technique can be found in other tutorials on the web. This is just my attempt to bring together the advice and ideas I found from many different sources, with a few experiments and disasters of my own thrown in for good measure. I hope you've found this useful and if you have any suggestions of your own please feel free to leave feedback (good or bad) in the comments below.
Posted by BigLee at 09:01