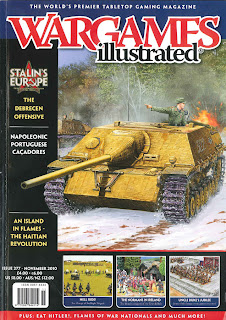 I always get a tingle of excitement when I hear the letter box clatter around the middle of the month. Most of the time all I get in the post is junk mail or bills so its nice to get something in the post to look forward to. I subscribe to Wargames Illustrated so my copy usually arrives a week or two before it hits the shelves in newsagents. I've not made a secret that I enjoy WI both for its range of articles but also for the high quality eye-candy within its pages and I look forward to every issue with anticipation. I buy other magazines as well but I tend to pick them up as and when I get the chance and largely dependent on what articles are in a particular issue.

This months WI has the theme of the Battle for Hungary in October 1944. The Russians were steadily sweeping aside the German and Axis forces and the battles that raged across Hungary at this time marked the beginning of the Soviet domination of eastern Europe.  There are three theme oriented articles in this issue focusing on the German Feldherrnhalle Divisions, Operation Gypsy Baron and the Hungarian Artillery.

As always there are also several other articles not linked to the issues theme and this month there are pieces on the Haitian Revolution of 1791; the Portuguese Cacadore battalions from 1808; the Norman invasion of Ireland in the 12th Century; and a pulp fiction game called Eat Hitler featuring Nazis and Dinosaurs! 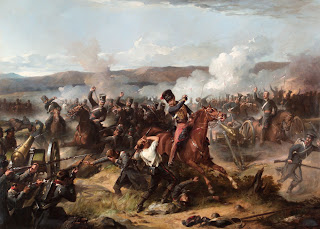 My favorite articles also had nothing to do with the theme of this months magazine. The Charge of the Light Brigade has become part of our cultural heritage and most people have heard of it even if they are unsure what it was. Its one of those military engagements that were once played endlessly by wargamers and it became a bit of a cliche and fell out of favour. Now it never gets played and this article looks at a recent participation game that sought to bring this most famous of cavalry charges back into the mainstream of gaming.
The article itself covered both the history of the real event and how the developers went about recreating it on a games table. Interspersed throughout are the immortal words of Alfred Lord Tennyson's famous poem, The Charge of the Light Brigade.
One other article I enjoyed was the review of the 2010 US Flames of War nationals. This article features pictures of award winning painted FoW armies that can't help but inspire newbies like me. I understand that for some wargamers the influence on the content of the magazine by Battlefront is something they don't like. But despite all the doomsayers predictions I think WI has successfully avoided becoming a sales brochure for Battlefront. What they have brought to this magazine is a talent for presentation that continues to make this an enjoyable read every month.
Posted by BigLee at 09:01