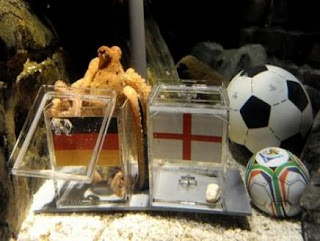 Paul, the supposedly psychic octopus who rose to fame during the World Cup earlier in the year, died a few days ago. Some comentators believe he died under mysterious circumstances. Murder has even been suggested. One story I read suggested that Paul died before the end of the competition and an elaborate cover up had been put in place to conceal the fact.

The world of sport is in shock.
I love the explanation given by the German aquarium where Paul passed away "We can absolutely assure you that he died last night. He was about two and a half, which is the average age for an octopus. He died of simple and straightforward death". Well... erm, death will do that to you. 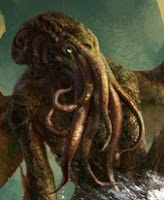 Personally I have my own theory. A certain eldritch being didn't like another tentacled celebrity muscling in on his act and had his cultists kill the upstart Cephelopod. Its so obvious I'm amazed no one else has realised this. Or maybe they have, and then been silenced....
I must use the power of the Internet to get my message out. I had to write about this, before they come for me as well !! I can hear strange footsteps outside my room and now and again the smell of rotting fish wafts through the air. My dreams have become troubled and I have a strange longing to visit the ocean. If this is my last blog post, make sure my story gets out. People will believe it, after all it's published on the Internet!