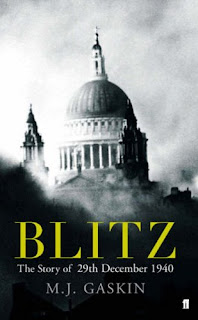 Blitz by Margaret Gaskin is the story of one night of the London Blitz and it's a story inspired by one of the most famous pictures of the war, that of a defiant St Paul's emerging from the smoke of a city in flames.

The early chapters of this book paint a picture of London as it was in those last few hours before the raid. The city was ancient and steeped in history, it was a city of medieval guilds, Georgian mansions and Victorian bureaucracy that sat at the heart of an Empire. It was a city that was old, immutable, rooted in history and in tradition. It was a hub of business, industry and commerce. And for all these reasons and more, it lay indefensible in the face of Nazi night bombing raids.

After six months of the Blitz, and victory in the Battle of Britain, most Londoners had learned to ‘just get on with it’. It has become a cliche but a cup of tea really was viewed as the universal panacea for all ills. It also helped that most Londoners were also just a little bit crazy. Reaction to the Blitz - even in the darkest hour - ranged from the typically British ‘not to bad’ to ‘ mustn't grumble’ !

Britain stood alone with the tide of war raging around it. It had seen off invasion - just - but now Hitler was intent on wearing down the British in an all out war of attrition. The Luftwaffe - having failed to take control of the air during the day - were intent on making the night their hunting ground. The X-Verfahren (X-System) was a new guidance technique which used highly focused beams of radio waves to enable suitably equipped aircraft to navigate in the pitch black of night, and hit targets with incredible accuracy. The pathfinders of tonight’s raid on London were 11 Heinkel HE III's of Kampfgruppe 100 and between them they were poised to drop 1152 fire-bombs right in the heart of the City. 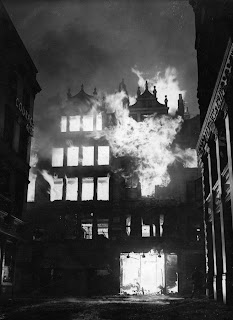 As day turned to dusk and the Blackout came into force small groups of Auxiliary Fire Service volunteers prepared to defend their areas should a raid take place. All business with 30 or more staff were obliged to provide fire watchers for their buildings but many hundreds of smaller building remained closed and locked on that cold Sunday Night. When Kampfgruppe 100 started dropping its incendiary bombs hundreds were put out quickly by alert AFS members. But hundred more fell on empty buildings and soon fires were burning uncontrolled across the city.

As the firestorm grew and consumed more and more buildings refugees from the various city shelters were heading for the relative safety of St Paul's. Of course it wasn’t safe and the crypts were never designated a public shelter as they offered little or no protection from HE bombs. But on this night of nights St Paul's became a place of refuge for exhausted AFS and civilians alike.

By now the weather had closed in and the second wave of German bombers thankfully never left their bases. But the fires started by the first wave had created three huge conflagrations that were threatening to merge and create one massive fire-storm. The second Great Fire of London.

Daily Mail photographer Herbert Mason has spent the evening wandering the streets taking pictures of the battle against the fire. In the early hours of December 30th he went up to the roof of the Mail building and watched the fire from his new vantage point. “The smoke parted like the curtain of a theatre and there before me was this wonderful vista, more like a dream, not frightening.” Against the flames, Wrens famous dome of St Paul's stood silhouetted and, almost miraculously, unscathed. Mason saw the light gleam on the golden cross above and, at the perfect instant, clicked the shutter.” 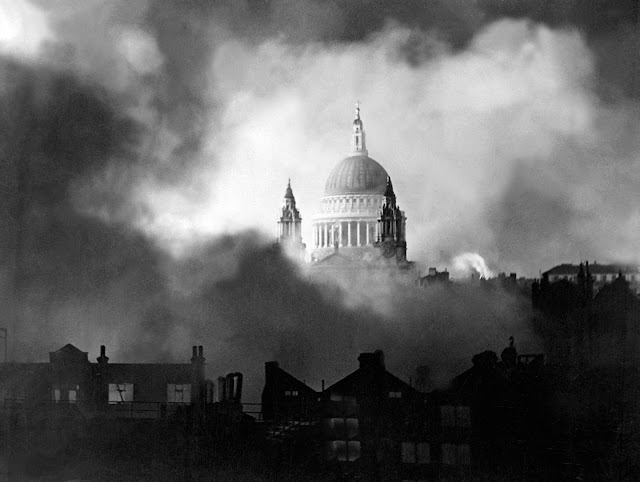 I have to admit that there were times as I read this book if felt myself moved close to tears. London is wonderfully cosmopolitan, vibrant, noisy and busy and I love it. This is my home town and as I read this book I was following its destruction one building at a time. History was literally being reduced to ashes and rubble and its valiant defenders could do little to stop the hungry flames from consuming everything. 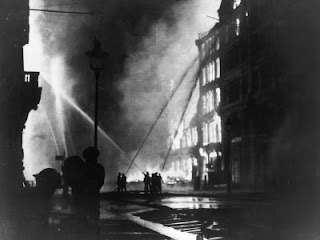 Somehow of course they did hold back the flames. Little by little the fire teams gave ground but in so doing began to regain control and stop the fire spreading to new areas. The firestorm began to burn itself out although high winds (caused by the intense heat of the flames) continued to send burning embers high into the air and made every building a massive chimney of fire and smoke. Fire teams had to draw water from the Thames, sometimes pumped up to half a mile from the river and then from water tank to water tank.

Fires continued to burn in some areas well into the next day but by the morning the cleanup operation was already underway as workers returned to businesses that may or may not have survived the night. London would prevail and its people had shown that they could 'take it'. U.S. Journalist Ed Murrow in broadcast from London captured some of the awe felt by foreign correspondents who witnessed the Blitz when he wrote: "When this is all over in the days to come, men will speak of this war, and they will say: I was a soldier, or I was a sailor, or I was a pilot; and others will say with equal pride: I was a citizen of London"

Much of the story of that awful night is told in the diaries of those that took part and survived its horrors. One diarist, Nell carver wrote the day after this raid "There is not the slightest feeling of defeat in the air or on the faces of the clerks and shopkeepers - only a stern and grim determination to hold on to the end - Hitlers end".

The passing of 70 years has made this terrible period of London history a distant event, unknown to many of the cities current inhabitants. However the scars of the blitz are still evident for those that know where to look and London would have looked very different today but for the events of 1940-45. I strongly recommend this book to anyone who lives in london today and I defy any reader not to be moved by the story that Margaret Gaskin tells.
Posted by BigLee at 09:01